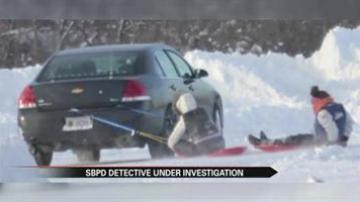 SOUTH BEND, Ind. -- Thursday we showed you pictures of an unmarked police car pulling two children on a sled. We spoke with the South Bend Police Department Friday to find out if the officer will face any punishment.

Captain Phil Trent of the South Bend Police Department says he isn't sure if there has been any wrongdoing but Detective Will Johnson doesn't have his take home car right now.

Gary Morseau lives across the street from LaSalle Academy and took the photos.

"Honestly, I was just seeing a family out playing and was just taking a photo of that because everybody was sharing stories on the news and sending photos in of what people were doing and that was my intent," said Morseau.

Morseau says when he enlarged the photos he realized it wasn't just any car towing two kids on sleds.

"I enlarged it, I saw that it was a police car because I could see the bar lights in the back and it started troubling me a little bit," said Morseau.

The unmarked police car was assigned to South Bend Police Detective Will Johnson.

The department is now investigating the incident.

"Are you trespassing, are you on public property, what exactly is going on, what is the level of danger?" said Trent.

Trent says there were no laws broken.

"There's not anything that exists in Indiana statute that addresses this specific issue, nor is there anything in our duty manual other than some generalities that say due care, do regard safety when operating a vehicle," said Trent.

Morseau says what worries him most is that his taxpayer dollars were paying for the joy ride-and he used the pictures to start a conversation in the community.

"It actually got people talking about an issue and sometimes we have an elephant in the room that we don't address the issue," said Morseau.

Police investigators say they'd like to talk with Morseau about what he saw.

"If somebody is saying that a foul was committed, we really need to talk to the eyewitness," said Trent.

Morseau says he's reached out to the police department but hasn't heard back yet.