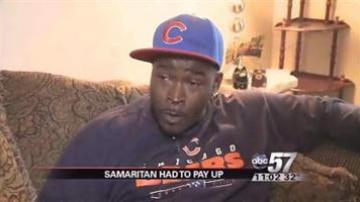 MISHAWAKA, IND. --  Walter Brown says he was just feet away when a man got shot on 26th street, right outside of the Courtyard Apartments saturday morning.  Brown decided to step in and help.

"I had to pick him up..because there wasn't an ambulance on the way and i figured he would have died then...so i picked him up and took him to the hospital", said Walter Brown.

On the way to the emergency room, the man was bleeding pretty badly.  A major artery in his leg had been hit.

"When i cleaned out my vehicle there was blood starting on the outside of my jeep..i had to slide him in cause he was heavy...and oh there was blood everywhere", said Brown.

The South Bend police took Brown's jeep as evidence and said they would return it to him in a few hours, but those hours turned into two days.

When he got to the police station, officers told him he would have to pick up his jeep at Herb's Towing in South Bend.

The towing company said he owed them a two hundred dollar towing fee.

"Man if you see someone out there trying to help...why penalize them?", said Brown.

Walter says he is now out of half his rent money.  But he says helping that complete stranger was well worth it.