Police: Man lucky to be alive after flipping semi into ditch 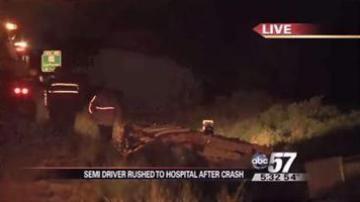 LAPORTE CO., Ind. – A semi driver was rushed to the hospital this morning after police said he fell asleep at the wheel and flipped over into a ditch.

Officers at the scene said by the looks of the tire tracks, the man was probably driving in the ditch for a good mile before he overturned around 3 a.m. on Wednesday. It happened on the westbound side near mile marker 50.

Police said he’s lucky to be alive, since the passenger side of the cab was completely crushed; officers said the man only had a few bumps and bruises.

The man was hauling lumber, and stacks crews blocked off the stacks of wood that spilled into the ditch with construction cones until workers had more daylight to get rid of the load.

Traffic was down to one lane for over two hours, until crews cleared the scene.