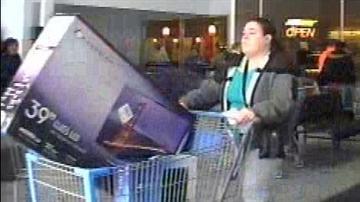 ELKHART, Ind. -- Elkhart Police are asking for the public's help in identifying a woman seen on surveillance video allegedly using a stolen credit card to purchase a large screen television at Walmart.

Police say on January 26, a mother and daughter were inside a business when someone broke out a window and stole a purse.

While the women were in the business, a woman was captured on surveillance video at Walmart on CR6W using a credit card taken from the car, police said.

She made numerous purchases including a 39-inch flat screen television, according to police.