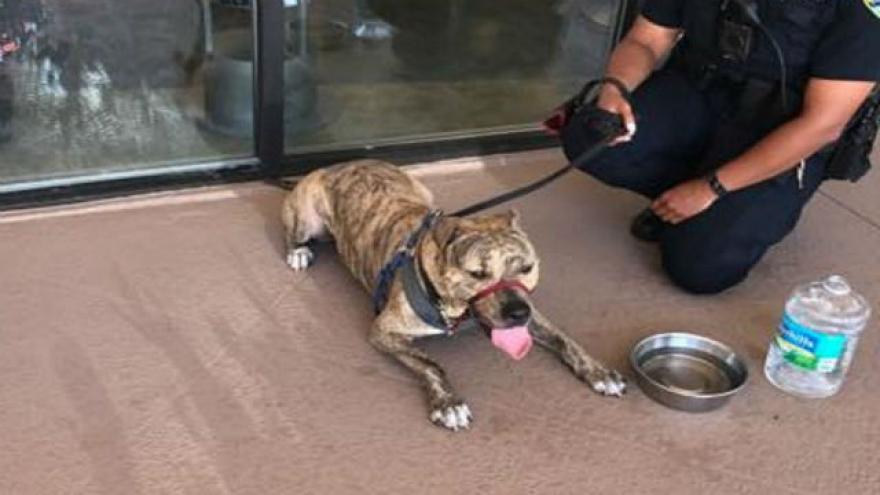 This pit bull recuperates after being freed from a hot car by police in Florida. Photo courtesy Boynton Beach Police Department

(CNN) -- In the hot summer months, an errand run can quickly turn deadly if a pet is left alone in a car. This may seem obvious, but some well-meaning owners just don't get it.

Allow police in Boynton Beach, Florida, to explain in no uncertain terms.

Officers recently rescued a pit bull whose owner had stepped into a bank, leaving the dog alone with the windows rolled up. A concerned onlooker called the police, who spent 10 to 15 minutes looking for the dog's owner (don't worry -- they say an officer stayed with the dog during this time to make sure it was okay).

When they couldn't find the owner, they smashed the car's window, led the suffering dog to safety and gave it some water.

They then posted a serious warning to citizens on their Facebook page.

"Repeat after us...it is never OK to leave your pet in an unattended vehicle," they wrote in describing the rescue. They also pointed out that such a practice is illegal in Boynton Beach, as it is in plenty of other cities around the country.

The episode Monday morning may make animal lovers livid, but the police department pointed out it's often a question of ignorance, not malice, that leads to incidents like this.

"Investigator [Liz] Roehrich said most of the time she encounters dogs left in vehicles, the owners are otherwise responsible, loving and good caretakers. They just don't know the law or they think that it's OK if it's only for a minute," they wrote.

"We are here to tell you that it is not. Ever."

Police also posted videos of an officer breaking into the car and of the dog recuperating safely after the ordeal.

Even in 85-degree weather, a car's interior can climb past 100 degrees Fahrenheit in a mere 10 minutes, according to the American Veterinary Medical Association.

According to the National Weather Service, the high temperature in the area Monday was 91 degrees.

If the horrors of that equation aren't enough to bring the point home, research from Michigan State University's Animal Legal and Historical Center shows at least 26 states have laws that make it, in some way or another, illegal to leave an animal in a parked vehicle.

In addition, Good Samaritan laws, which offer legal protection to people who intervene in emergency situations, may also cover someone who sees a pet in a hot car and intervenes to save its life.