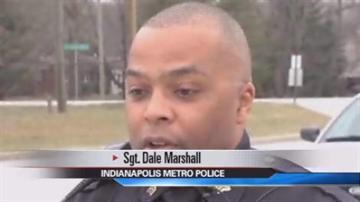 The officers responded to a scene of a personal injury accident only to find the crashed car in flames.

An off-duty sergeant who was nearby jumped into action while the other officers tried to free the man.

"It was very hot, smoke filled trying to get the guy out of the car. I was personally trying to open the door," said Sgt. Dale Marshall.

One of the officers was treated for smoke inhalation and second-degree burns.

The driver was also taken to the hospital suffering multiple fractures and third-degree burns over his entire body.

His right foot was amputated.