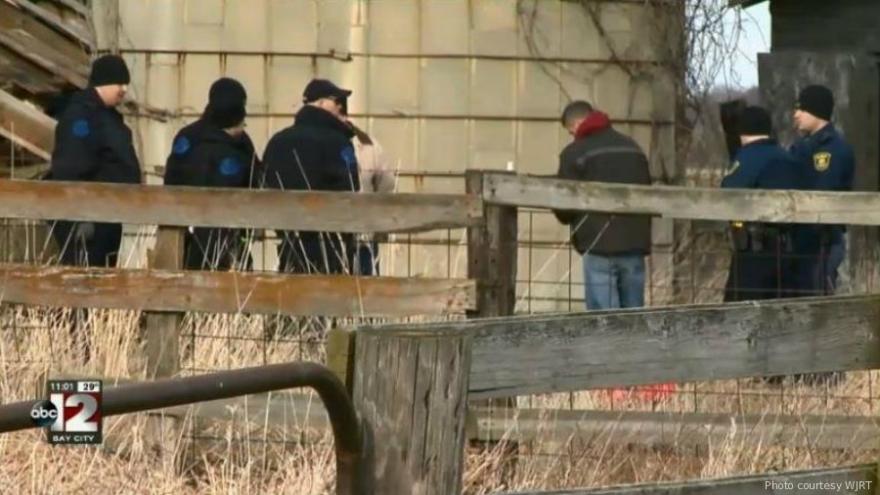 TUSCOLA COUNTY, Mich. (WJRT)/CNN) -- A tenant-landlord dispute led to two people being shot and killed in Tuscola County this weekend, the widower and father of the victims said.

Police found the body of 45-year-old Peter Brodick Jr. on Friday in a home in the 9800 block of Boucher Road in Tuscola County's Watertown Township.

Brodick Jr. co-owns and rents with his step-mother, 55-year-old Wendy Brodick. Her body was found on Sunday near an unused farm silo about a mile away.

Both victims died of gunshot wounds. Police say a 36-year-old man who rents the Boucher Road home from them has been arrested, but no formal charges had been filed Monday afternoon.

Tuscola County Prosecutor Mark Reene said the investigation started when police got a tip about Brodick Jr.'s body at the house and responded there Friday evening.

"Information actually came from an informant about certain items that had been provided to him by a suspect," Reene said.

Police questioned the suspect who made statements to investigators.

"Obtained some additional information from the suspect and eventually it came to light that there was a second victim," Reene said.

That led police to the silo, where they found Wendy Brodick's body.

Reene credits quick work by police to get the suspect in custody.

"Credit has to be given to the state police on how they put this together step by step," he said.

The suspect is not being identified because he has not appeared before a judge for arraignment. But police say he is a probation absconder after failing to abide by terms related to a methamphetamine conviction.

Brodick Sr. said his son put the drug demons behind him and was turning his life around. He had launched a new hobby using metal to create art.

"He got off that meth and was doing good," Brodick Sr. said of his son.

He knows the suspect, who could face life in prison with no chance of parole if he gets convicted of first-degree murder. But Brodick Sr. would rather see a different sentence handed down.

"When you do something like that, you need to die," he said.