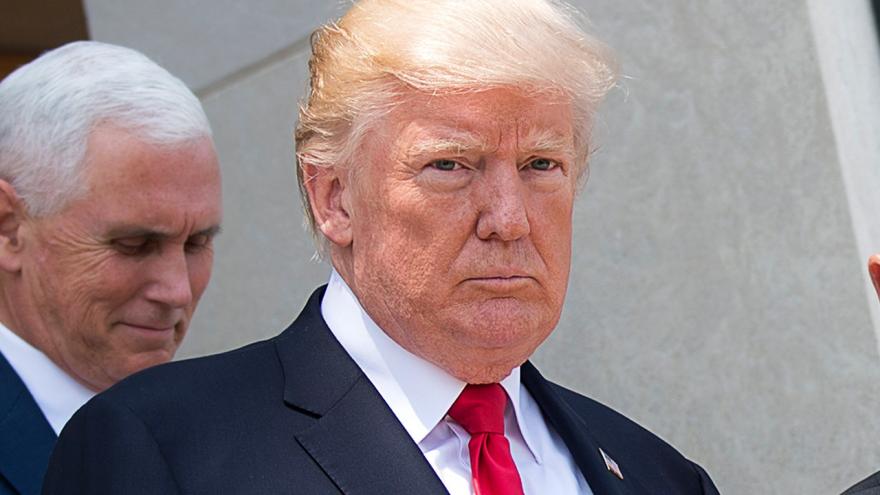 (CNN) -- President Donald Trump's statement encouraging police officers to be "rough" with people they arrest has drawn criticism in law enforcement circles for sending the wrong message at a time of heightened tensions with the public.

"As a department, we do not and will not tolerate 'rough(ing)' up prisoners," the Suffolk County Police Department said in a statement.

Speaking before law enforcement officers, Trump praised the aggressive tactics of immigration officers and suggested that police shouldn't protect the heads of handcuffed suspects being put in the back of a car.

"When you see these thugs being thrown into the back of a paddy wagon. You see them thrown in rough. I said, 'Please don't be too nice,'" Trump said to applause, referring to officers shielding prisoners' heads with their hands.

"Like, don't hit their head and they've just killed somebody. I said, 'You can take the hand away, OK?'"

From Boston to Los Angeles, however, law enforcement agencies pushed back.

Suffolk County police have been under Justice Department oversight since 2013, after a federal investigation exposed a pattern of anti-immigrant violence.

A Boston Police Department statement said its "priority has been and continues to be building relationships and trust with the community we serve. As a police department we are committed to helping people,not harming them."

In New York, Police Commissioner James O'Neill said in a statement that to "suggest that police officers apply any standard in the use of force other than what is reasonable and necessary is irresponsible, unprofessional and sends the wrong message to law enforcement as well as the public."

The head of the New York City agency tasked with investigating complaints against officers also denounced the remarks.

"President Trump's comments fly in the face of the responsibility our city's officers display in the line of duty," Maya Wiley, chairwoman of the Civilian Complaint Review Board, said in a statement.

"But for many communities in our city, President Trump's comments only (stoke) fears of interacting with officers. President Trump's speech today was shameful, dangerous, and damages the progress our city has made toward improving police-community relations."

The Gainesville, Florida, police department said on Facebook the President "has no business endorsing or condoning cops being rough with arrestees and suggesting that we should slam their heads onto the car while putting them in."

Trump's remarks "set modern policing back and erased a lot of the strides we have made to build trust in our community."

"I'm a cop," he wrote. "I do not agree with or condone @POTUS remarks today on police brutality. Those that applauded and cheered should be ashamed."

A Los Angeles police spokesman, Mike Lopez, said the department will "treat everyone with integrity and respect."

The Portland Police Bureau in Oregon expressed similar sentiments on Twitter, saying that officers were "expected to treat everyone with dignity & respect, even when they are a suspect."

The International Association of Chiefs of Police issued a statement on the use of force by police, saying officers are trained to treat everyone with "dignity and respect."

Jim Bueermann, the president of the nonprofit Police Foundation, which works to improve policing, said Trump's support for law enforcement was appreciated but "we cannot support any commentary -- in sincerity or jest -- that undermines the trust that our communities place in us to protect and serve."

The topic of rough police tactics is a sensitive one in Baltimore, a city still reeling from the April 2015 death of Freddie Gray after he was arrested and put in the back of a police van.

"Are you kidding me? This is disgusting," Baltimore County Executive Kevin Kamenetz wrote on Twitter about Trump's remarks on the handling of suspected criminals.

There was no immediate response from Baltimore's police department, where six officers were charged in connection with Gray's death. The 25-year-old suffered a fatal spine injury while being transported in the van. The cases against the officers, who were charged with crimes ranging from reckless endangerment to murder, ended without convictions.

Trump's Justice Department is charged with enforcing a sweeping consent decree with reforms for Baltimore's police department after a federal investigation, launched in the wake of Gray's death, revealed patterns of discriminatory and unconstitutional policing.

Attorney General Jeff Sessions earlier this year directed his lawyers to ask the judge for additional time for the department to review the proposed decree to ensure it aligned with the priorities of the Trump administration on "crime reduction."

In April, a federal judge approved the reform plan anyway. That same month, Sessions had ordered a comprehensive review of all police reform activities, including any existing or contemplated consent decrees.

"For the first time in many years we feel we have a president who supports law enforcement," John Becker said in a statement.

The group Blue Lives Matter tweeted that Trump's remarks were made in jest.

"Trump didn't tell police to go out & brutalize people as the media would have you believe," the tweet said. "It was a joke."