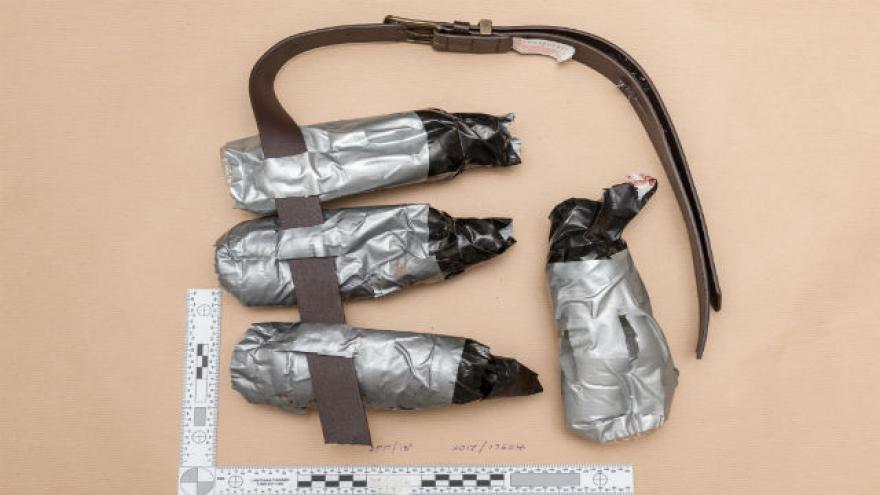 Pictured above is one of the fake explosive belts worn by the London Bridge attackers. Photo courtesy Metropolitan Police

"I have not seen this tactic in the UK before where terrorists create maximum fear by strapping fake explosives to themselves," said Cmdr. Dean Haydon of the Metropolitan Police, who's leading the investigation.

The three men rammed into pedestrians on London Bridge on June 3 before going on a stabbing rampage at bars at nearby Borough Market. By the time the carnage was over, eight people were dead.

The attackers, identified as Khuram Butt, Rachid Redouane and Youssef Zaghba, were fatally shot by police.

The belts were still attached to the men when they were killed, Metropolitan Police said.

The fake explosive belts were visible during the attacks, Haydon said, and may have appeared genuine to those who saw them.

"It could be that they had plans to take the attack in to a siege situation or it might be that they saw it as protection from being shot themselves," he said in a statement.

"It makes the bravery of those police officers and members of the public who tackled the terrorists even more remarkable."

Details emerging since the attack point to plans for a large-scale assault.

British police said Saturday that Butt, the ringleader, tried to rent a 7.5-ton truck online on the morning of June 3, but did not provide payment details when prompted.

He rented a different van later that evening.

Large trucks have been used in past ramming attacks in Europe and have caused higher numbers of casualties. One attacker killed 86 people in France when he plowed through a large crowd celebrating the national Bastille Day last July. In Berlin, another one rammed into a Christmas market, killing 12.

At the time of the London attacks, Butt was out on bail in a fraud case dating to October last year. He had not been charged in that case due to insufficient evidence, police said.

Two British counter-terrorism sources told CNN that the arrest was part of an effort by British police and the MI5 intelligence agency to take known Islamist extremists off the streets by going after them for crimes unrelated to terrorism.

In addition to the fake explosives, police have released images of ceramic knives found on or near the assailants and the van they used to hit people on the bridge.

Three 12-inch pink ceramic kitchen knives were found with tape around the handles and leather straps attached to them to keep the weapons on the attackers' wrists.

Inside the van, police found two blowtorches as well as what appeared to be 13 Molotov cocktails made from wine bottles and a possible flammable liquid.

The van also had office chairs and a suitcase. Police believe the attackers told relatives they were using it to move.