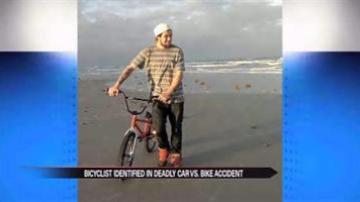 BREMEN, Ind. -- Police have released the identities of the victims in the accident that killed a bicyclist on SR 331 on Thursday.

Police identified the bicyclist as 20-year-old Kevin Silz. Police say he died of head and neck injuries sustained in the crash. He died at Memorial Hospital.

The SUV driver was 33-year-old Holly Huntington was treated and released.