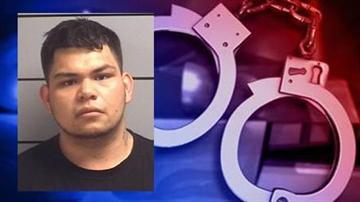 BREMEN, Ind. -- A Bremen Police officer saved a woman and her child from a man who was holding them captive, according to reports.

According to police, around 4:45 a.m. Wednesday, an officer was on regular patrol in the area of SR 311 and SR 106 when he saw a vehicle headed southbound on SR 331.

A woman was hanging out the driver's side rear window and she was screaming for someone to help her.

The officer pulled over the vehicle and determined the woman and her 2-year-old child were abducted from Benhen Avenue in Elkhart that morning by the suspect, who is an acquaintance of the woman.

The suspect has been identified as 21-year-old Jesus Hernandez of Elkhart. He has been charged with kidnapping, domestic battery, carjacking, operator never licensed and child endangerment.