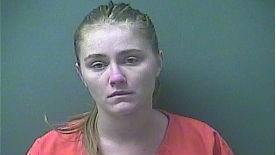 La Porte Police responded to a 'suspicious person' call that led to the arrest of a Michigan City woman Tuesday.

Around 7:10 p.m., police responded to Dunkin Donuts on Pine Lake Avenue to investigate a reportedly suspicious woman inside the business that seemed to be slipping in and out of consciousness.

Police say they located the woman who was seated at a table with her head down.

26-year-old Kristen Guillen was found to be wanted on warrants for theft and failure to appear on a domestic battery charge, according to police.

When Guillen was taken into custody, a syringe was found on her person during the search.

Police say she told them she did not have a medical condition for which a syringe was needed, but told police she was holding it for someone else.

She was additionally charged with unlawful possession of a syringe, a Level 6 felony, and was transported to the La Porte County Jail.