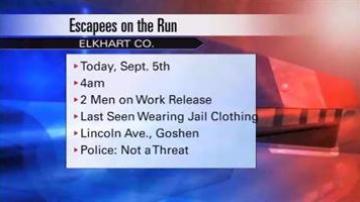 GOSHEN, Ind. – Two men who deputies said escaped from their work release programs are on the run in Elkhart County and officers are trying to track them down.

Dispatch said the two men were reported missing around 4 a.m. after they escaped from their work release program.

Police said the two guys might be wearing clothes from the jail and were last seen in Goshen walking towards Lincoln Avenue.

Officers said the men are not dangerous or a threat. Usually work release is for prisoners who are not violent and are allowed to work outside of the jail.

Stay with ABC57 News on air and online. We’ll keep you posted with updates as we get them into the newsroom.