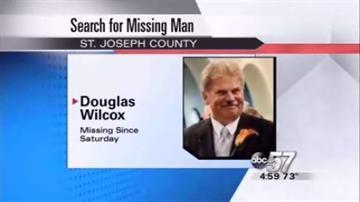 ST. JOSEPH COUNTY, Ind. -- A missing man, a house fire, and a recent real estate sale all appear to be connected. Family members haven't spoken to Douglas Wilcox since Saturday and his house caught fire on Sunday.

From a distance, the Wilcox residence on Sandybrook Drive may not catch your attention.

Police are searching for the resident, 62-year-old Douglas Wilcox.

Detectives say Wilcox's daughter last spoke with him Saturday in the early evening.

The house is boarded up, there's shattered glass on the roof and window frames scattered about.

Fire investigators searched several times, but found no evidence that Wilcox was home at the time of the fire.

His vehicle, a 2003 black Ford Taurus, is also missing.

According to a Saint Joseph County detective, the house does not belong to Wilcox anymore.

According to public records, the home was sold in a recent sheriff's sale.

The new owner took possession of the home on July 25th, but investigators say the new owner agreed to let Wilcox stay until last Sunday - the day the house went up in flames.

Wilcox was a no-show to work at Memorial Hospital Monday morning.

A memorial spokesperson says Wilcox worked long-term for the hospital in parking and valet services and that he has only called in sick once in the last year and a half and has never  not shown up without calling.

If you have any information about Douglas Wilcox please contact the Saint Joseph County Sheriff's Department.

Clay Fire Territory says the home is in such bad shape they're going to have to bring in their tactical rescue team to stabilize the home so they can finish the fire investigation.