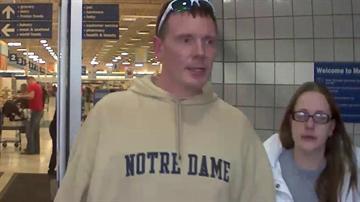 MISHAWAKA, Ind. – The Mishawaka Police Department has released photos of three people who are suspects in the theft of a vehicle from the Meijer on Grape Road.

According to police, the victim placed his car keys in his cart, then turned to look at apples. When he turned back, his cart was missing.

The victim, Mark Rand, told store management about his missing keys, then went to the front of the store to make sure his car was still there.

While watching, a large group of people entered the store and he lost sight of his vehicle for a moment.

After the group passed, he no longer saw his gray 2009 Pontiac G6 with Indiana license plate SLM346 was gone.

Rand told police that in the back seat of the vehicle was his Sony A 700 digital camera with pictures from a wedding he had just taken.

Police said the trio also loaded up the cart with merchandise and left without paying.

Police have obtained surveillance photos of possible suspects in the case. They are seeking the identities of these three individuals.

Police also believe they may have a connection to a gold colored minivan.

If you have any information in this case, contact Crime Stoppers or the Mishawaka Police Department Detective Bureau at 574-258-1684.