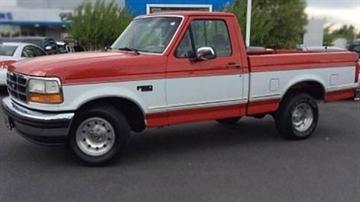 SOUTH BEND, Ind. -- South Bend Police are searching for an older model F150 pickup truck that may have been involved in a fatal hit and run crash Sunday morning.

According to Police, Quentin Freeman was riding his moped southbound on Franklin Street when he was struck from behind by a vehicle.

Freeman's passenger was ejected from the moped.

The truck continued and dragged Freeman and his moped a considerable distance, causing fatal injuries to Freeman.

The truck fled the scene without stopping.

The vehicle has noticeable rust over both fenders and at the lower body.

The tires are also larger than normal which raises the height of the vehicle, according to police.

The driver was described as a white male with blonde curly hair and a male passenger.

The truck pictured is similar, but is not the actual vehicle.

If you have any information on the vehicle or the accident, contact the South Bend Police Department at 235-9201 or Crime Stoppers at 288-STOP.