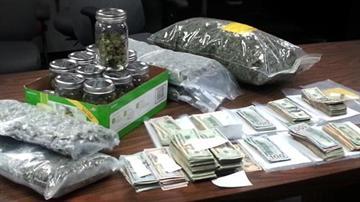 The MSOS unit was conducting an investigation in the 300 block of E 13th Street and conducted a traffic stop on a man seen leaving the home.

During the traffic stop, a K-9 officer located 4-pounds of high grade marijuana and a large amount of cash, according to reports.

During the investigation, police got a search warrant for a room at a local hotel. There they discovered more marijuana and cash.

Officers then returned to the home on E. 13th Street where they located marijuana and cash.

Police said total they seized over 10 pounds of high-grade marijuana and over $33,000 in cash.

Two other people were arrested: