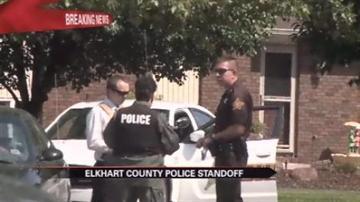 ELKHART COUNTY, Ind. -- An entire neighborhood in Elkhart County was blocked off because of a standoff with police that started around 2 p.m. Friday.

The standoff started with a 9-1-1 call about a domestic dispute at a home on Melrose Place.

The standoff caused three schools to be locked down for a period of time.

Police said there were two other people inside the home, a woman and a child.

The suspect surrendered around 6:15 p.m.

Police said the suspect set fire to the home, but firefighters were able to get it under control.