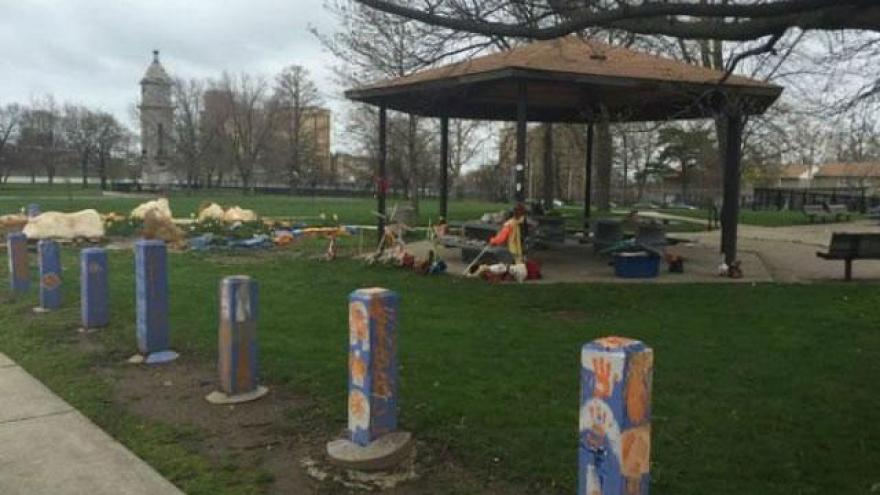 (CNN) -- More than two years after an officer shot and killed 12-year-old Tamir Rice, Cleveland police have disciplined a dispatcher for failing to relay a citizen's 911 report that Rice was "probably a juvenile" and that his gun was "probably fake," according to a letter signed by the chief.

Dispatcher Constance Hollinger was suspended for eight days without pay for the violation.

Also punished was Officer William Cunningham II, who was off duty working security at a recreation center nearby when the shooting happened. He was suspended for two days without pay for working that second job without permission. He was also accused of submitting an untruthful report about the shooting.

"Eight days for gross negligence resulting in the death of a 12-year-old boy," Chandra said in a statement. "How pathetic is that?"

The death of Rice, who was African-American, in November 2014 grew to exemplify the kind of complaints about excessive use of police force that have defined the Black Lives Matter movement.

'The system is broken'

Chandra criticized what he described as lack of communication from the city and the results of its internal investigation, adding that the suspensions would not likely deter similar acts in the future.

"Fat chance of this absurd discipline deterring anyone from anything other than continued incompetence and indifference," Chandra said. "That the dispatcher still has her job when a child is dead speaks volumes about accountability in Cleveland."

"If this is the best that that system can offer, then the system is broken," he said.

In an interview with CNN, Chandra said he believes Cunningham is the officer who arrived at the scene after the shooting and tackled Tamir Rice's grieving sister.

"The issue of secondary employment is of no real interest to us, and it is an example of the city providing the appearance of doing something when it actually doesn't hold anyone accountable," Chandra said.

Moments before Rice was killed, a witness had called 911 to report that someone was brandishing a gun in a park. The caller noted that the person was "probably a juvenile" and that the gun was "probably fake," records show.

But that information was not shared by the dispatcher with the responding officers, Timothy Loehmann and Frank Garmback. Video of the incident shows that Loehmann, then a trainee, shot Rice just seconds after arriving at the park.

An Ohio grand jury declined in 2015 to criminally charge the officers.

"Given this perfect storm of human error, mistakes and communications by all involved that day, the evidence did not indicate criminal conduct by police," prosecutor Tim McGinty said at the time.

The city of Cleveland settled a wrongful death lawsuit last year with the Rice family for $6 million.

Loehmann and Garmback still face internal administrative charges, city officials have said. If found guilty, they could be suspended or fired for the violations.