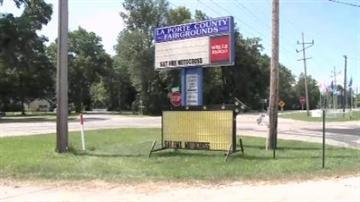 LA PORTE COUNTY, Ind. —  La Porte County Sheriff's deputies acted upon tips from public at the La Porte County fair on Thursday and arrested a teenager who allegedly had an explosive device in his backpack.

A concerned citizen approached deputies about a teenager that may have had an explosive device in a backpack. A call was also made into the La Porte County 911 with similar information.

Police believe that the teen planned to detonate the device near the carnival rides.

According to a press release issued by the La Porte County Sheriff's Department early Monday, deputies were able to locate the suspect within seven minutes. They removed the backpack from the teen and secured the suspect and device.

The La Porte 16-year-old was charged with possession of a destructive device.

During the investigation, a second teen became loud and unruly. Deputies arrested that teen for disorderly conduct. The teen then kicked a deputy trying to secure him. Pepper spray was used and the teen became compliant. The teen is also charged with battery to a police officer and resisting.

Deputies removed the suspicious device from the fairgrounds and the Porter County Bomb Squad was called to dismantle the device. Technicians with the bomb squad determined that the device was an explosive device.

The Bureau of Alcohol, Tabacco, Firearms and Explosives was called in to assist with the investigation. Working with investigators from the La Porte County Sheriff's office, it was determined that the second teen suspect was responsible for making the device.

He was taken into custody without incident at his home. He was also charged with manufacturing a destructive device.