Police trying to find some of their Most Wanted suspects 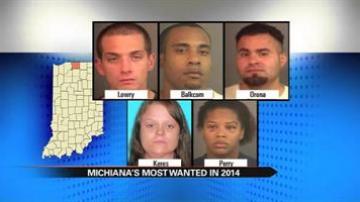 Earl is still on the run.

"Anybody who has fled the way that he did, went into hiding, and obviously is still wanted on warrants is a risk to everybody whether it be the police, the citizens, whoever it may be that he encounters," said Lieutenant Scott Hanley of the South Bend Police Department.

Police say catching up with suspects like Earl is a top priority for 2014.

But they need your help.

"Anytime they see anything suspicious or know somebody that's committed a crime, call the police department, any one of the agencies in St. Joe County or lower Michigan. They can also call Crime Stoppers," said Hanley.

Shawntalia Perry is wanted for fraud

Ricardo Orona is wanted for burglary

Berrien County's most wanted suspects include Tanita Crockett and India Greer. They are wanted for assault with a dangerous weapon.

They're also looking for Markeese Patrick, who is wanted for robbery.

Joann Williams is wanted on a domestic violence charge.

In LaPorte County, detectives are on the lookout for Kamil Shelton, Clemie Dorton and Mariano Gallardo for drug offenses.

They also want Sedrick Toney for robbery and Johnny McSwain is wanted for possession of illegal weapons.

If you know anything about the whereabouts of these men and women-you're asked to call the Michiana Crime Stoppers hotline at 574-288-STOP or 800-342-STOP.