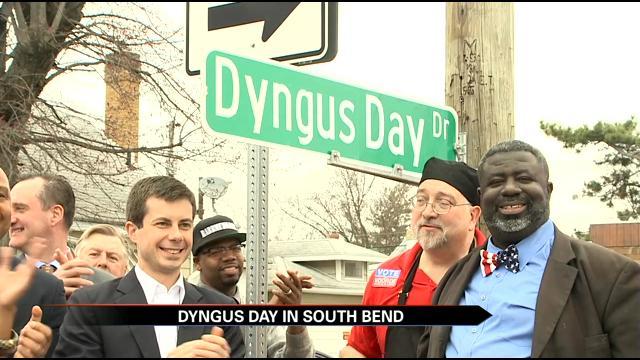 Dyngus Day is not just a big day for the Polish community in Michiana but also for many politicians running for local office.

With just weeks until the primary elections, many are using this day to campaign for support.

In between the polish dogs and prayers, candidates from both democratic and republican parties met with voters ahead of the upcoming election.

The Democratic Party drew a large turnout at its west side club headquarters.

While Republicans took to smaller venues like De Amicis Club in Mishawaka.

Both sides are hoping these events increase voter participation come May.

“Events like this really help to get the word out how important it is for our citizens to vote, especially at the local level,” said Mishawaka Mayor Dave Wood.

“You know its really important for folks to understand your vote is your voice," said Mayor Buttigieg. "So with just four weeks left until the primary election, it is important to do everything we can do to remind people that its coming up.”

But this Democratic unity wont last long as Mayor Buttigieg meets Councilman Henry Davis Jr. in the primary next month.

And Davis says he wants to bring change to the office.

“Right now we have to refocus and re-energize the people in the city of south bend and make sure they are confident in the jobs we are doing,” said Davis.

Republicans from all of St. Joseph County enjoyed fellowship with voters over polish sausages.

But Monday also served as an introduction to a new face of the county's party.

“This town needs someone that will speak to them and not for them,” said Jones.

Jones will have plenty of time to speak to people as she faces the Democratic Party's nominee in the November election.

Until then, both sides hope events like this will lead to stronger voter turn outs.