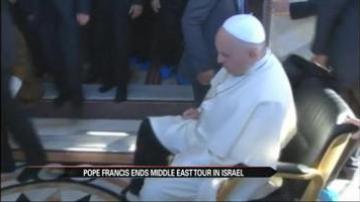 ISRAEL -- Pope Francis wrapped up his three day tour of the Middle East Monday with a visit to Israel.

Sunday, the Pope turned some heads when he said he was in the state of Palestine, a term both Israel and the United States reject.

Monday the pontiff honored victims of persecution, offered more prayers for peace, and then met with survivors of the holocaust.

"He was deferring to me and acknowledging what I was and who I was and what I represented," said Holocaust survivor Joseph Gottdenker.

The pope's prayers for peace could be answered in the next month.

The Pope made a surprise request for the Presidents of Israel and the Palestinian authority to join him in prayer at the Vatican. Both men accepted his invitation.