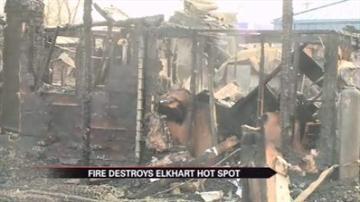 ELKHART, Ind.-- Employees stared in disbelief. The charred remains of "My Dad's Place" are all that's left of an Elkhart bar many called a second home.

"First place made me feel at home. Made me feel comfortable from moving from out of town being a single mom and not knowing anybody," said Tanya O'Brien, bartender. "It's the best place I've ever worked."

Four fire departments responded to help, but it was too late.

"There was nothing we could do," said Randy stone, Osolo fire department. "This particular area- Simonton Lake- is not hydrated. So we had a limited water supply and we had a heavy, heavy fire load on arrival."

Since there is no fire hydrant nearby, crews improvised.

"We had the capabilities with the help of our other agencies that assisted us on this that we actually drafted water from the lake to fight the fire," said Stone.

The flames won the fight. Now employees are left without a job to support their families.

"There's quite a few of us that are single moms so this is very devastating for us," said O'Brien.

"Just about everybody was a regular," said Amber Bundy, manager. "It was like being at home- a second home. And it's gone."

"Everyday you could come in here and see the same people everyday," said Larry Ward, regular customer.  "People around the lake, all the hard workers around here. They came here to relax after work. It was a good place."

Ward knew the original owner who passed away two years ago. The owner's daughter, who he started it with, now runs the friendly tavern, which led to its name.

Even though he's gone, Ward says he'd want one thing.

"He's saying rebuild," said Ward. "Bigger and better. And that's the way it'll be. It will be."