Portage Meat and Market closing at end of January

NOW: Portage Meat and Market closing at end of January

SOUTH BEND, Ind. -- The Portage Meat and Market store will be closing at the end of January, according to company officials.

The store, on Elwood Avenue in South Bend, announced they will be closing their doors for good.

Portage Meat & Market— who officially opened their doors two years ago after Martin’s officially closed in September of 2019.

The location has become the go to store for so many on South Bend’s north west side— and many people are concerned on where they will be able to go now.

The next closest grocery store with fresh produce and meat is over a mile and a half away. As you can see on this map the Saigon Market on West Colfax is the next closest store at 1.6 miles away,

With the Save a Lot on Chapin Street .2 miles further.

Then the purple porch over 2 miles away. 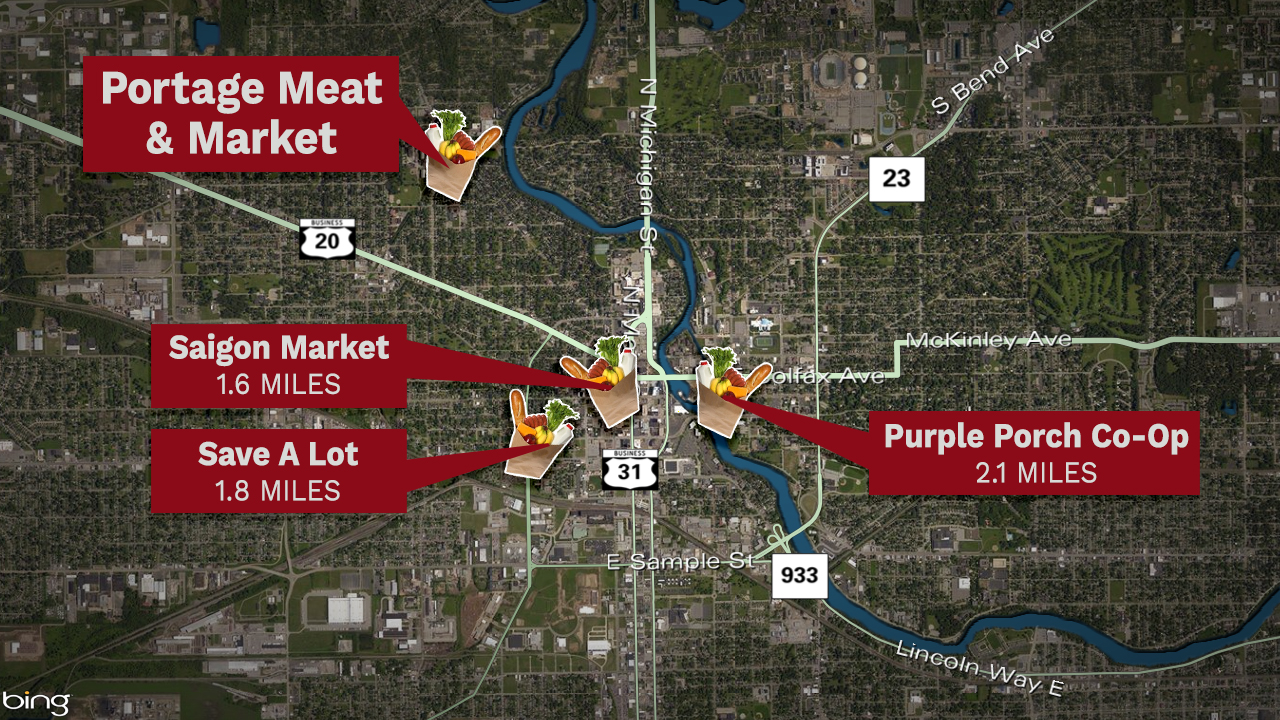 And for many people who have come to rely on this portage store—tonight they were in for a bit of a shock.

Another resident, Dan Grays was "disappointed."

Corey Williams says it was, “shocking to me that they’re closing.”

Tonight faithful customers of the portage meat and market store learned the neighborhoods go to place is shutting down.

Starr says, "For fresh meat and fruit there’s no where else to go.”

And the community is sounding off.

Starr says for a "one stop shopping--this whole area folks depend on this.”

Dan Grays says, “there are people that need this store to be here in this neighborhood now they are going to have to find other ways to get their groceries.”

Because people say taking away this store is destroying a landmark.

Starr has lived in South Bend for over 48 years and says, “this is a landmark. This is where Martin's first started. They are doing away with history.”

Common Council President, Tim Scott, of South Bend's 2nd District says, "what is created is pretty much a good desert kinda in the heart of our city.”

Corey Smith agrees and says, "Martin’s has been there forever so you take that away it’s a food desert there’s nothing else around.”

A food desert is basically an area where the residents cant easily get to a large grocery store with fresh produce and meat.

And this closing will directly affect those who heavily depend on being able to walk to the store.

Corey Smith says, “there’s nothing in walking distance out here.”

Dan Grays remarks, "you can’t eat out every night and CVS definitely isn’t going to have what you need for food.”

Starr thought of many of her neighbors and says, “if you don’t have transportation or what not other than the bus and then your limited on that.”

And Common Council President Tim Scott, whose district covers the Portage store, was sad to see the first Martin's in South Bend leave but says work needs to be done now.

"What we’ve got to do as a city is sell it and help get it developed.”

And Scott says there have been plans in the works to redevelop that plaza, but now, "because of the urgency is move those plans forward.”

But many are not ready to say good bye to this historic, South Bend staple.

Starr says would ,love to sign a petition or something if it meant Portage Meat & Market could stay.

The Senior Vice President of Martin's Supermarkets and Division VP, Retail, Spartan Nash, released this statement regarding the closure.

Portage Meat & Market, a retail banner of Martin's Super Markets, has served South Bend's near-northwest side for the past 2 years. Recently, the difficult decision was made to close this store. Our final day of operation is scheduled for late January. This closure is a business decision based on our continuous evaluation of what is best for the Martin's retail footprint, our associates and the communities we serve.

While it is never an easy decision to close a store, this is not a reflection on our dedicated associates or their commitment to serving our customers. In fact, we are working with our full- and part-time Portage Meat associates to offer them employment opportunities in surrounding Martin's Super Markets stores in nearby communities.