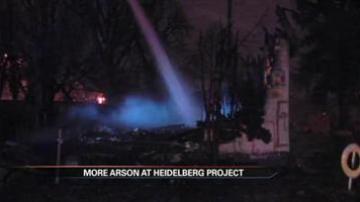 DETROIT -- Detroit firefighters were called to a part of the Heidelberg Project for a possible arson fire.

The blaze was reported on Sunday night at the structure known as the Clock House on the city's East side.

Nobody was injured in the fire but Sunday's fire brings the total to 8 fires set at different Heidelberg structures through the city since May.

The Heidelberg Project consists of outdoor artwork. The project started in the late 80s as a way to transform a decaying, crime ridden neighborhood.

The feds are now offering a $5,000 reward for anyone who can give them information that leads to an arrest in the arsons.

Click here for more information on the Heidelberg Project.