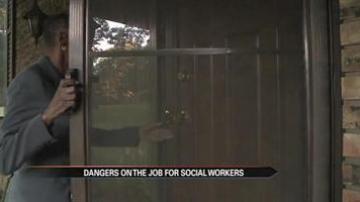 SOUTH BEND, Ind. -- 19 year old Isaac Miller is accused of assaulting and attempting to rape his CPS caseworker. Friday, the Prosecutor’s Office charged Miller with several crimes including attempted rape, sexual battery and strangulation. ABC 57 talked one on one with a local social worker about some of the dangers faced on the job and the best ways to handle them.

"Its one thing to listen to people rant and rave full of anger, but when they start targeting you, that’s an indication its time to go," explained Debra Stanley, social worker and executive director of Imani Unidad.

As a social worker, it is up to Stanley to check in on people who may need her help; From sexually abused kids to ex-cons.  Stanley says attacks like what Miller is being accused of are extremely rare. But she says nonetheless, it is important to set clear boundaries. "No we’re not buddies, we’re not pals, this is a mutually respectful relationship."

Stanley says, at the same time, you have to make you’re client feel like they have choices…It is a balancing act.  "Because when people attack, that's a power issue and so you want to allow them to have as much control over their lives there homes as possible."

Stanley also explained a few things social workers are trained to do that make all the difference: Anytime time you go into someone’s home, speak to everyone in the room, establish an exit strategy, and never sit with your back to the door.