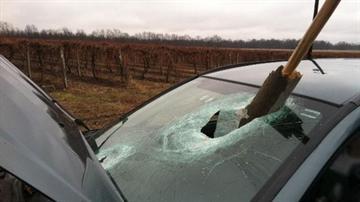 VAN BUREN COUNTY, Mich. -- An 18-year-old driver told police he fell asleep while driving on M40 in Porter Township. He narrowly escaped with his life when a post went through the windshield and stopped just inches from the driver.

According to the Van Buren County Sheriff's Department, they were called to a single vehicle accident Thursday.

When they arrived, they found a Chrysler Pacifica with a post sticking out the windshield.

The driver told police he fell asleep while driving northbound on M40. His car went off the side of the road, into a farm field, hit a post and then went back onto the road.

The driver had non-life threatening injuries and was taken to the Bronson Hospital in Kalamazoo.

He was cited for careless driving.