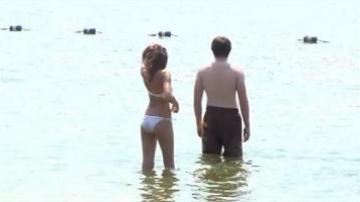 NORTH LIBERTY, Ind. -- Potato Creek State Park Worster Lake is on a list of 13 lakes across the state that are considered under a high Blue-Green algae counts. DNR officials would not comment on camera about the issue, nor would the staff allow ABC 57 on the park property Sunday afternoon.

A DNR Specialist at Salamonie Reservoir located in Andrews, IN told ABC 57 news that two dogs died last month after the water their had high Blue-Green algae counts. He mentioned the Indiana Department of Environmental Management samples the water at the reservoir and issued a health alert after 100,000 cells of Blue-Green algae was measured.

ABC 57 called the Potato Creek State Park to find out if the DNR staff is taking any precautions. The DNR Staff said they are advising visitors to shower with soapy water after swimming. When asked about the warnings for pets the staff said they were pretty sure the Blue-Green algae counts weren't at the same level as that of the Salamonie Reservoir located in Andrews where the two dogs died.

However, ABC 57 found Potato Creek State Park Worster Lake on the www.in.gov/idem/algae website list updated on August 24th that states the lake is under a high count alert. On the website the Indiana State Department of Health cautions Hoosiers that dogs are particularly susceptible to Blue-Green algae and it may cause sudden death.

Listed on Potato Creek State Park's website (http://www.in.gov/dnr/parklake/2972.htm) is a caution advisory that states, "due to high Blue-Green algae counts, users and pets should avoid ingesting water, avoid contact with surface scums when visible and shower with soapy water after swimming." A DNR Specialist at Salamonie Reservoir confirmed the Blue-Green algae warning is the same warning that is posted on it's website.

ABC 57 spoke with people who were leaving Potato Creek State Park on Sunday afternoon, only one family heard anything about the high Blue-Green algae advisory and the precautionary measures the DNR staff said they were advising their visitors to follow.

Andy Horvath of South Bend said, "We came in yesterday and all the kids wanted to go swimming because it was hot so we took the kids, but we didn't take the dog though." He said after they got out of the lake they all took showers. When asked how he found out about the high Blue-Green algae counts at the park, he said his mom informed him who heard from another camper about the ordeal.

As for Elizabeth Kwaitkowski of South Bend she said, "I would have like to have known what area we had to stay out of, we come here all the time and I never check the website right before we come, we came to walk with our dog and no one told us anything as we entered. I mean she's (their dog) is the one that we should have known, we are not going to drink any water there, but hiking she gets thirsty and we were by the lakes, but thankfully she didn't drink anything. We packed our own bottled water and cup for her."

ABC 57 talked with folks in 7 other vehicles exiting Potato Creek State Park on Sunday afternoon and none of them had heard anything about the Blue-Green algae warnings nor the precautionary measures the Indiana State Department of Health recommends for humans or pets.