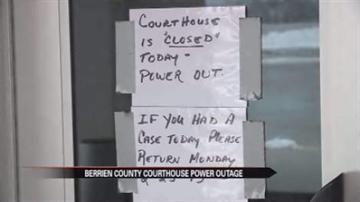 BERRIEN COUNTY, Mich. -- The Berrien County Courthouse lost power just before noon Friday. Because of the length of time it would take to fix the problem, the courthouse was shut down and employees were sent home.

"We gave it until about 12:15 close to 12:30 and then we went ahead and shut the courthouse down. Our administrators were in contact with AEP officials and they gave us a time of about 3 p.m. before they could get anything going for us and we could not do business like that,” said Joe Zangaro, Head of Security at the Berrien County Courthouse.

Everyone was asked to leave the four story courthouse.

"Our security staff went through, we went floor by floor and we do have emergency lighting, course the elevators were out so we had to do everything by the stairwells,” said Zangaro.

While security crews escorted employees to the exits, tech teams got to work on the computers.

"Our IT people right now are on top of it. The system is back up and running now, just not at the court house because we do not have the electricity for it. But the internal system is running,” said Zangaro.

The sheriff's department next door was also in the dark.

Crews brought in a generator to keep the jail powered, but employees were allowed to start the weekend early.

The power failure was due to an underground cable. Crews had to test each cable to find the one with the problem before it could be fixed.

Officials say anyone with a court date Friday that was cancelled for the power outage, is asked to come back on Monday at the same time.