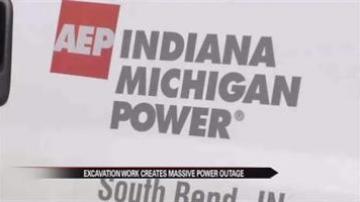 SOUTH BEND, Ind. -- Power has been restored to customers in the southeast part of South Bend. Nearly 10,000 customers were without power for several hours Wednesday.

Those who lost power included Adams High School and the IUSB campus.

"The vast majority of campus was dead in the water,” said Ken Baierl the Director of Communications and Marketing.

"They are wondering what's going on, asking 21 questions of what happened and everything, and we don't know much all we know is power’s out and we can't get much business,” said convenience store employee Sasha Smith.

David Mayne, a spokesperson with Indiana Michigan Power said the problem that left close to 10,000 customers without power happened at the substation off of Ironwood Road just south of Jefferson Boulevard in South Bend.

He said contractors doing some excavation work made contact with something they weren’t supposed to and the power outage went into play automatically as a safety.

No gas, no Subway, no McDonald’s, no street lights and no classes for Indiana University South Bend.

"It did affect the entire campus, every building, so we canceled class,” said Baierl.

For the Marathon gas station at 2130 Mishawaka Avenue, it meant no business and for customers, it meant no gas.

"I live over here by IUSB and I haven't been able to find gas so I'm assuming I am going to have to go all the way out there in Mishawaka for gas. It's really crazy, I should had gone to work today if I knew this was going to happen. Can't do nothing,” said Barbara Bennett of South Bend who was frustrated by the power outage on her day off from work.

Shortly after 5:30 p.m. I&M Power announced majority of the power had been restored.