The photo above represents the area of greatest concern for strong to severe thunderstorms late in the day Thursday into Thursday night. Michiana is included in that zone as of Monday afternoon. The storm system responsible for this severe threat is going to be a powerhouse of a storm for millions across the United States. 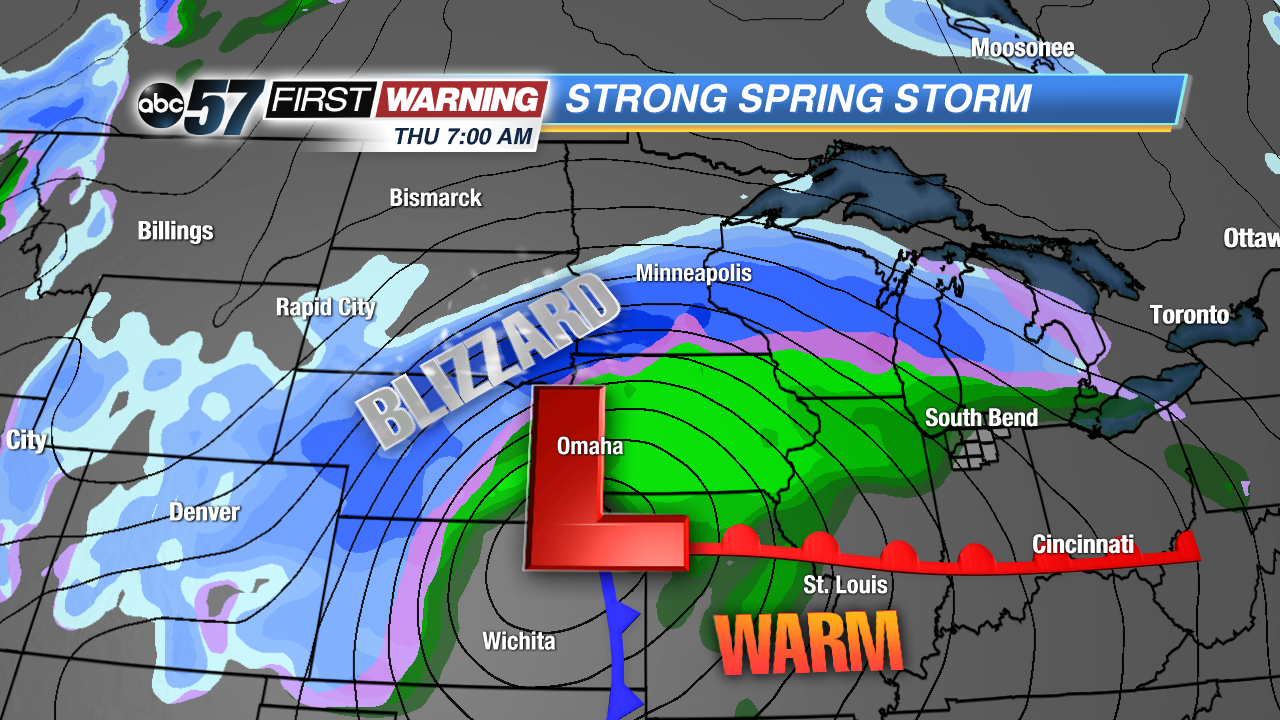 System's location and radar at 7 a.m. Thursday.
The area of low pressure is going to develop in Colorado late Tuesday night and rapidly strengthen into a significant storm as it moves into Kansas and Nebraska by late Wednesday. As it strengthens, a large swatch of substantial snowfall and blizzard-like conditions will exist from Colorado and Wyoming thru Nebraska, South Dakota, Minnesota, Wisconsin, and the Upper Peninsula of Michigan. 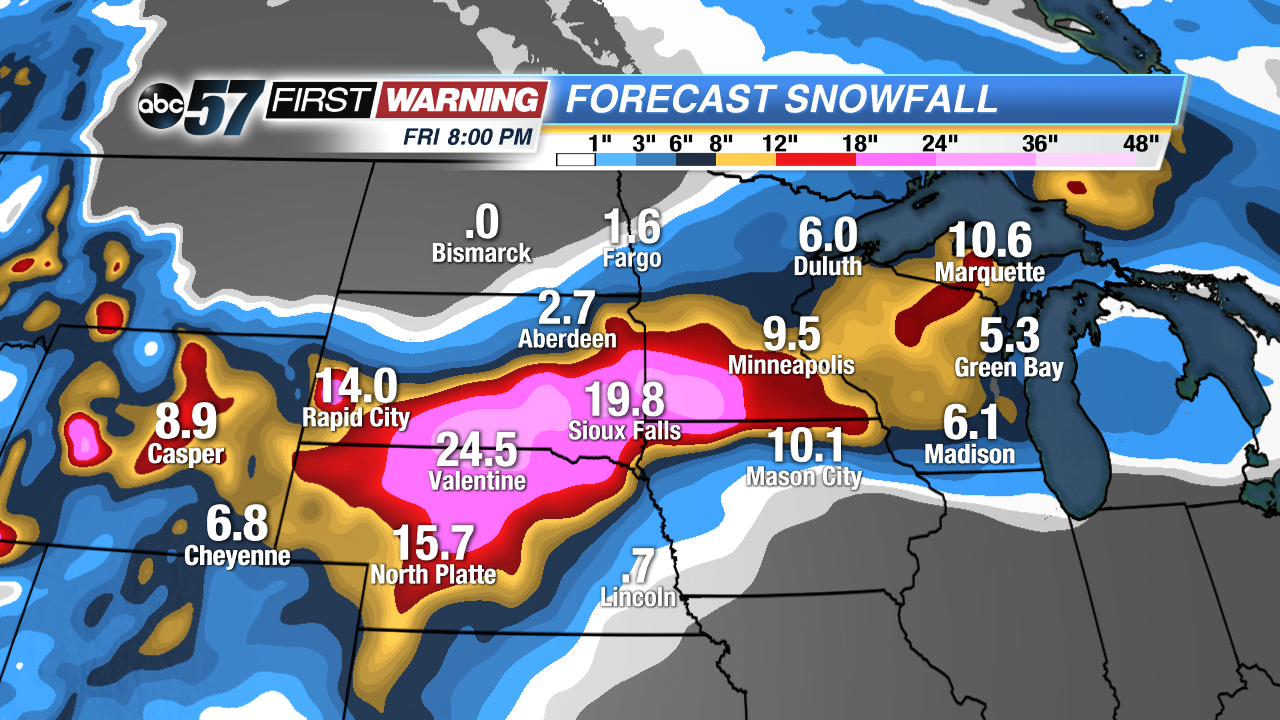 Projected snowfall according to the European forecast model.
Total snowfall by the time the system pushes away late Friday will range from a half-foot to upwards of two feet. The areas that will be hardest hit will be parts of Nebraska, South Dakota and Minnesota. Cities that will see the most snow include Rapid City, North Platte, Sioux Falls, Minneapolis, La Crosse, and Marquette. It will be a historic blizzard any way you cut it for millions across the Plains and Upper Midwest. 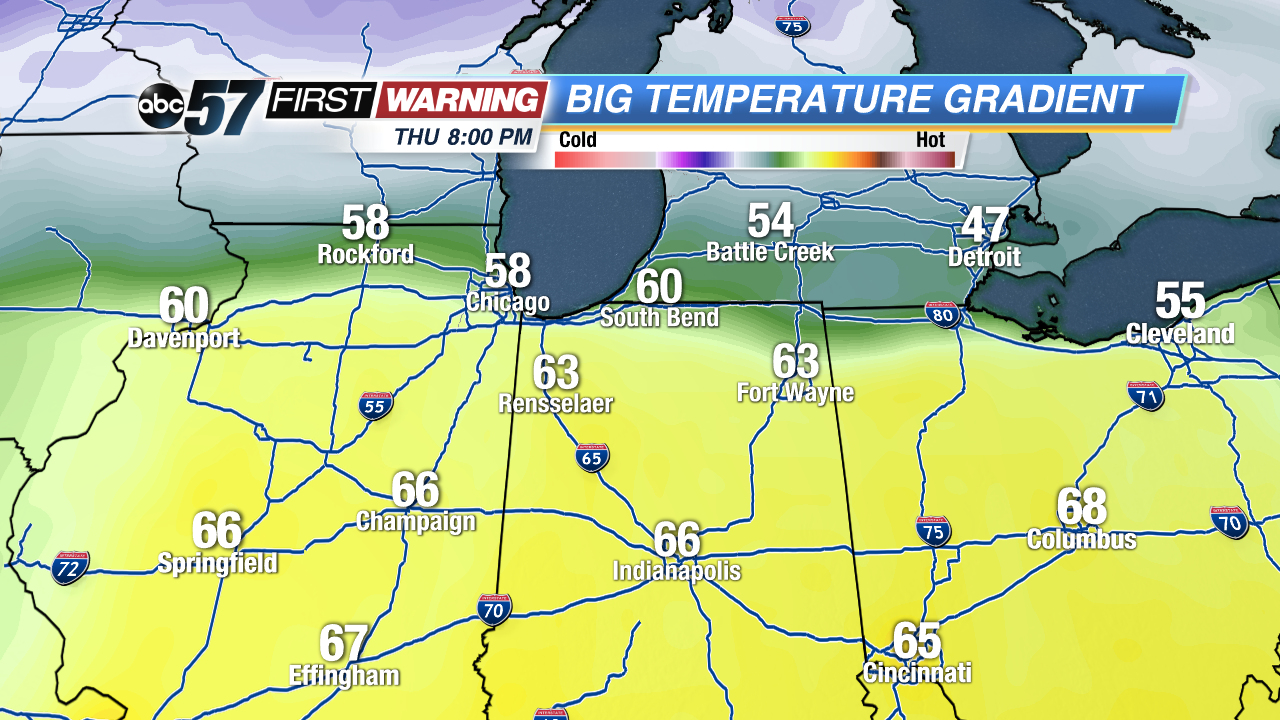 Just how far north the warm air spreads on Thursday will dictate how far north the severe threat goes.
While the blizzard is ongoing to our northwest, we will see a raw day Wednesday in the 40s with a chance of light rain. As the system moves closer on Thursday, a warm front will slide northward through Illinois, Indiana and Ohio. By early Thursday evening, temperatures will likely be in the lower 60s south of the Indiana-Michigan state line. Alongside the surge of mild air will be a surge of higher dew points and moisture. 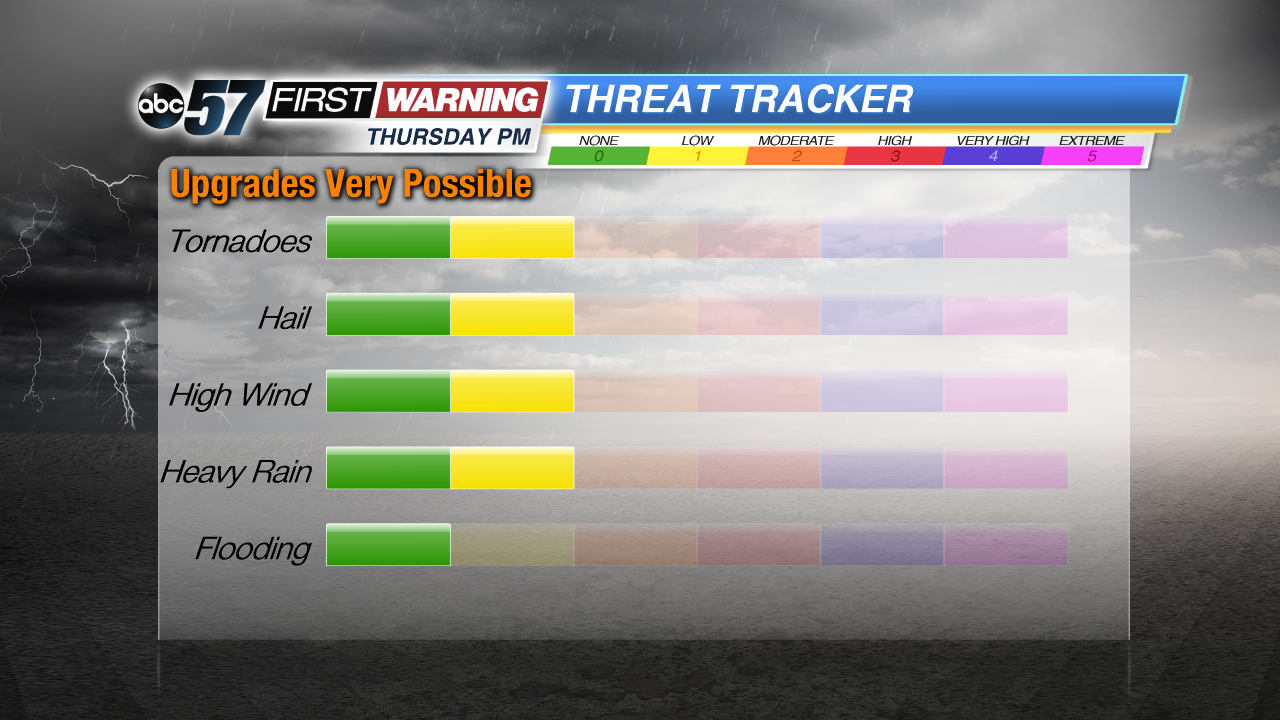 Current threat outlook for Thursday evening and night.
Throw in a very potent cold front and at least some thunderstorm ingredients like instability and wind shear, and we will have a chance of heavy rain and thunderstorms after 7 p.m. Thursday. If things come together, the threat for damaging winds, hail and perhaps a tornado will exist. For that reason, the Storm Prediction Center has already highlighted parts of Illinois and Indiana as having an elevated risk for strong to severe thunderstorms late Thursday afternoon into Thursday night. As is typically the case for Michiana, the severe threat is conditional on things coming together just right. If the storms come in too late, the threat of severe weather will be lower. If we see clouds and showers all day, the threat will be lower. It will be something to monitor throughout the week.
Share this article: