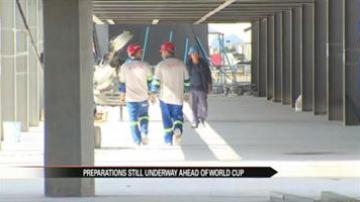 Soccer fans are getting pumped as we get closer to the start of the World Cup in Brazil.

The U.S. team arrived on Monday.

The 12 players representing the states have one week to get settled before their first game.

The Americans are coming into the cup strong having beaten Nigeria 2-to-1 on Saturday.

While the teams are trickling into Brazil workers are scrambling to pull together preparations for the opening ceremony.

Even some major projects like construction on stadiums and airports aren't finished.

Protesters across the country lashed out at the government for spending billions on stadiums and infrastructure instead of on schools and hospitals.

They plan on deploying more than 150,000 police and troops to protect soccer fans and tourists.

The first game starts shortly after with Brazil taking on Croatia.