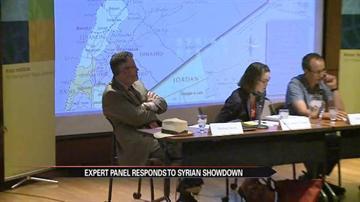 SOUTH BEND, Ind-- President Barack Obama addressed the nation for seventeen minutes Tuesday night, saying this is not a world we should accept. He encouraged all Americans to view the videos of the recent attack on Syrian civilians.

"And then ask what kind of world will we live in if the United States of America sees a dictator brazenly violate international law with poison gas and we choose to look the other way?" asked President Obama.

Before any targeted military strike, the President made it clear he will try diplomatic paths for a peaceful resolution and he wants Congress to post-pone the vote on the issue.

"I believe democracy is stronger with the support of Congress,” said Obama.

But not everyone wants the President to receive that support.

"I’m not willing to send young American men and women in uniform in harms way over this issue,” said Michael Desch, professor of political science, University of Notre Dame

Obama did leave a targeted military strike on the table, but this time: no boots will hit the ground. He's first calling on Assad to hand over the weapons.

Also, Obama said he is hopeful for a peaceful solution, something Professor Mary Ellen O'Connell was also praying for.

"We know that our role in life is to work for the common good. And the common good is to limit violence and to bring about the solution to disputes peacefully,” said O’Connell, professor of law and international dispute resolutions at Notre Dame.