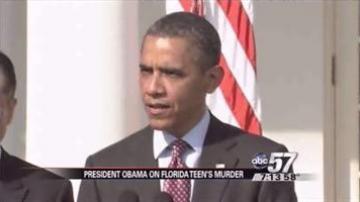 D.C.-- Even The President is weighing in on the shooting and killing of a 17-year-old Florida boy.

For days people have been rallying and demanding justice in the case of Trayvon Martin.

Martin was shot and killed by a neighbor who claimed he felt threatened.

President Obama was asked about the case after a press conference on Friday.

President said that there needs to be a solution that goes beyond justice in this one case.

President Obama said, "It is absolutely imperative to investigate every aspect of this and that,everybody pulls together; federal, state and local - to figure out exactly how this tragedy happened."

He also said that if he had a son, he would look like Trayvon Martin, and that this situation needs to be taken seriously.