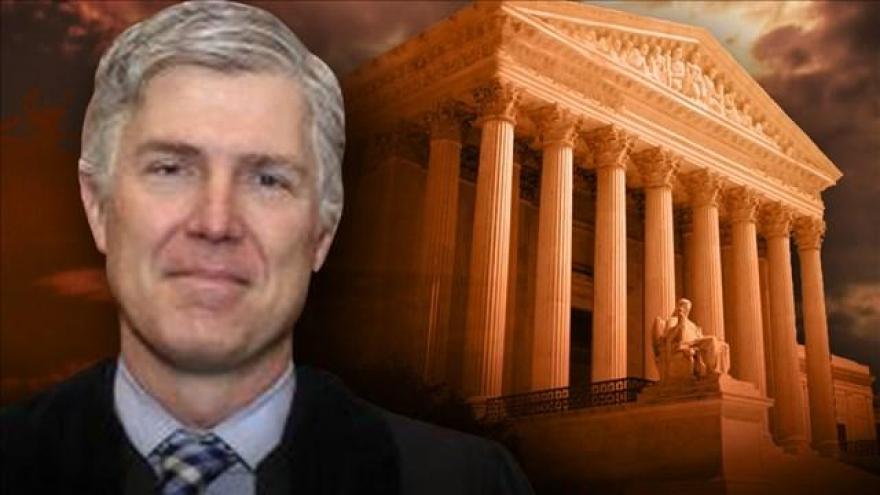 The nomination of Gorsuch, a 49-year-old federal appellate judge from Colorado, gives Trump and Republicans the opportunity to confirm someone who could cement the conservative direction of the court for decades.

Introducing Gorsuch, Trump said he had committed as a candidate to "find the very best judge in the country for the Supreme Court."

"Millions of voters said this was he single most important issue for them when they voted for me for president," Trump said. "I am a man of my word."

"Today I am keeping another promise to the American people by nominating Neil Gorsuch to the Supreme Court."

Trump made the announcement after an unusual day in which both top candidates for the nomination -- Gorsuch and Judge Thomas Hardiman -- were brought to Washington as the suspense built.

The court has been operating with eight justices since the sudden death last February of Justice Antonin Scalia. If confirmed, Gorsuch would continue the ideological balance that existed before Scalia's death, with four conservatives, four liberals and Justice Anthony Kennedy as a swing vote between the blocs.

Trump selected Gorsuch -- who sits on the 10th Circuit Court of Appeals -- from a list of 20 potential justices compiled during the presidential campaign in a direct appeal to conservative and evangelical voters skeptical about his commitment to their values.

Gorsuch's opinions on religious liberty, where he sided with the challengers to the so-called Obamacare contraceptive mandate, and on the separation of powers, where he said too much deference was given by the courts to administrative agencies, are key to his appeal to Republicans. As is his age. At 49, he could carry on Trump's legacy long after the President leaves office.

Unlike others on Trump's list, Gorsuch has an Ivy League pedigree, having attended Columbia and Harvard, and also studied at Oxford, where he earned a doctorate in legal philosophy.

Gorsuch is a fourth generation Coloradan and a former clerk to both Justices Byron White and Anthony Kennedy.

"It is an extraordinary resume. As good as it gets," Trump said.

"The qualifications of Judge Gorsuch are beyond dispute," Trump said. "I only hope that Democrats and Republicans can come together for one, for the good of the country."

On the bench he joined an opinion siding with closely held corporations who believed that the so called contraceptive mandate of Obamacare violated their religious beliefs. The ruling was later upheld by the Supreme Court. Gorsuch wrote separately holding that the mandate infringed upon the owners' religious beliefs "requiring them to lend what their religion teaches to be an impermissible degree of assistance to the commission of what their religion teaches to be a moral wrong."

He also wrote a majority opinion in a separation of powers case holding that too much deference was given to administrative agencies. This issue is a favorite of conservatives and Gorsuch's beliefs align with those of Scalia and Justice Clarence Thomas.

Gorsuch, in a speech last year at Case Western Reserve University School of law, aligned himself with Scalia's judicial philosophy.

"The great project of Justice Scalia's career was to remind us of the differences between judges and legislators. To remind us that legislators may appeal to their own moral convictions and to claims about social utility to reshape the law as they think it should be in the future, " he said. "But that judges should do none of these things in a democratic society."

At the White House Gorsuch he would faithfully commit to upholding the laws of the nation, saying he would act as a "servant of the Constitution and laws of this country."

"Justice Scalia was a lion of the law," he said.

When Obama nominated Garland to take Scalia's seat last year, liberals hoped that they would get a liberal majority that would swing the court left on key issues such as abortion, campaign finance and voting rights.

But Senate Republicans refused to hold hearings, citing the impending election which was still eight months away.

Democrats have said they would fight the new nominee "tooth and nail" putting not only his or her credentials to the test, but holding Republicans responsible for what liberals say is a "stolen seat."

After Trump's unexpected win, conservatives rejoiced, expecting the new president to nominate someone to the bench in the mold of Scalia. They also hope that with three justices on the Supreme Court in their late 70s and early 80s, Trump might have at least one more vacancy to fill.

If, for example, Justice Anthony Kennedy were to step down, the conservatives might be able to chip away at Roe v. Wade, the landmark opinion that legalized abortion.

Gorsuch's confirmation would mean a return to Washington.

He spent part of his youth in Washington when his mother, Anne Gorsuch Burford, served in the Reagan administration as administrator of the Environmental Protection Agency.

She resigned in 1983 under controversy after refusing to turn over toxic waste records to Congress.

He served as a partner at a prestigious Washington Law firm, Kellogg, Huber as well as Principal Deputy Associate Attorney General.

Gorsuch and his wife Louise have two daughters. They live in Boulder, Colorado.