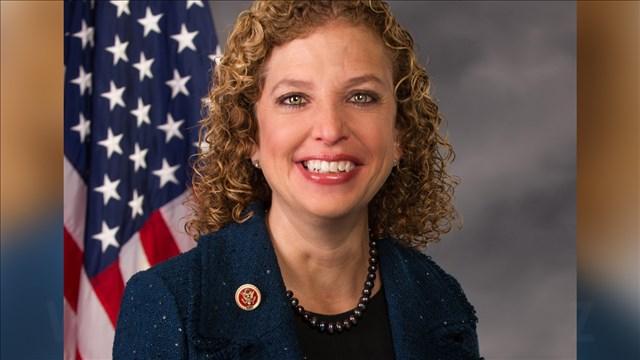 Both critics and supporters within the DNC are demanding Wasserman Schultz issue a statement to deal with the many issues raised by the release of a trove of DNC emails by Wikileaks that appeared to show the party favoring Clinton over Bernie Sanders during the primary process.

In a meeting Sunday that was described as at times contentious, Wasserman Schultz said she wanted the statement issued in the name of Amy Dacey, the DNC's CEO.

"We said no," said a veteran party activist involved in the discussions. "She needs to own this."

Separately, a Democratic operative said Hispanic leaders close to Clinton and her high command were discussing Housing Secretary Julian Castro as a possible successor to Wasserman Schultz at the DNC helm.

Party officials decided Saturday that Wasserman Schultz will not have a major speaking role or preside over daily convention proceedings this week.

Wasserman Schultz reluctantly agreed to relinquish her speaking role at the convention here, a sign of her politically fragile standing. But party leaders are now urging the Florida congresswoman to vacate her position as head of the party entirely in the wake of leaked emails suggesting the DNC favored Clinton during the primary and tried to take down Sanders by questioning his religion.

Democratic leaders are scrambling to keep the party united, but two officials familiar with the discussions said Wasserman Schultz was digging in and not eager to vacate her post until after the November elections.

"She seems oblivious to the volcano that will erupt if she walked into that [convention] hall," said a veteran Democratic operative, who added that as of Sunday morning, Wasserman Schultz believed the uproar would pass. "Forty percent of the people in that hall didn't like her to begin with. She was going to get booed before all this."

While Wasserman Shultz may be in danger of losing her job soon, she originally had no plans to seek re-election to her post as party leader when her term ends in January 2017.

Her stewardship of the DNC has been under fire through most of the presidential primary process, but her removal from the convention stage comes following the release of nearly 20,000 emails.

One email appears to show DNC staffers asking how they can reference Sanders' faith to weaken him in the eyes of Southern voters. Another seems to depict an attorney advising the committee on how to defend Hillary Clinton against an accusation by the Sanders campaign of not living up to a joint fundraising agreement.

Sanders on Sunday told Tapper the release of the DNC emails that show its staffers working against him underscores the position he's held for months: Wasserman Schultz needs to go.

"I don't think she is qualified to be the chair of the DNC, not only for these awful emails, which revealed the prejudice of the DNC, but also because we need a party that reaches out to working people and young people, and I don't think her leadership style is doing that," Sanders told Tapper on "State of the Union," on the eve of the Democratic National Convention in Philadelphia.

"I am not an atheist," he said. "But aside from all of that, it is an outrage and sad that you would have people in important positions in the DNC trying to undermine my campaign. It goes without saying: The function of the DNC is to represent all of the candidates -- to be fair and even-minded."

He added: "But again, we discussed this many, many months ago, on this show, so what is revealed now is not a shock to me."

The publication of the emails comes just a weekend before the start of the Democratic convention, where a major objective for Clinton will be to unify the Democratic party by winning over Sanders' voters.

Several Democratic sources told CNN that the leaked emails are a big source of contention and may inflame tensions between the Clinton and Sanders camps.

"It could threaten their agreement," one Democrat said, referring to the deal reached between Clinton and Sanders about the convention, delegates and the DNC. The party had agreed to include more progressive principles in its official platform and, as part of the agreement, Sanders dropped his fight to contest Wasserman Schultz as the head of the DNC.

Michael Briggs, a Sanders spokesman, had no comment Friday.

The issue surfaced on Saturday at Clinton's first campaign event with Tim Kaine as her running mate, when a protester was escorted out of Florida International University in Miami. The protester shouted "DNC leaks" soon after Clinton thanked Wasserman Schultz for her leadership at the DNC.

The DNC has previously had its files hacked by an individual named "Guccifer 2.0" that may have had ties to the Russians.

Hackers stole opposition research on Donald Trump from the DNC's servers in mid-June. Two separate Russian intelligence-linked cyberattack groups were both in the DNC's networks.