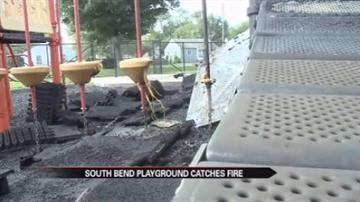 SOUTH BEND, Ind.-- The Harrison Primary School playground caught fire Saturday morning and the fire department says the fire was not an accident.

Investigators tested for traces of gasoline and flammable substances on the scene.

Several neighbors called 911 before ten a.m. saying the playground was on fire.

Chief Carl Buchanon said, “I think what this is is mischief.”

The fire department quickly put out the fire but the thick black smoke and smell of burning rubber still filled the area.

Mitchell Mace lives across the street from the elementary school and saw flames reaching thirty feet into the sky.

Mace says this isn't the first issue at the playground, and he's worried because his son goes to school there.

Mace said, “I’ve complained to the school and to the city about the type of vandalism that keeps going on over here. Graffiti, getting stuff torn up. Called the police before when somebody was over here with a club or baseball bat beating on stuff.”

Mace says for the sake of his children and others in the area he wants officials to do something about the vandalism in the area.

Buchanon said, “It’s a shame that the sanctity for these kids has been damaged, and for the ones that do the right thing they are going to be saddened but hopefully they will be able to get it repaired and back up and going.”