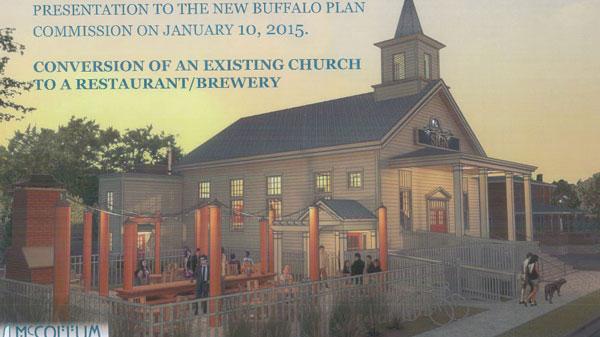 A Notre Dame Law Professor and her partner have submitted plans to convert the former Water's Edge United Methodist Church at 24 South Whittaker Street in New Buffalo, Michigan, into a brewery and restaurant.

"It was an old Methodist church that was built in the 1861 around the Civil War. We're going to convert the first floor into dining and brewing, the kitchen will be in the basement. The owners are going to be living next door in a single family house, and the other thing they wanted was an outdoor beer garden,” said William McCollum, the architect working on the project.

The pulpit inside the Methodist church on South Whittaker Street in downtown New Buffalo could soon be switched out for a wood fire Neapolitan pizza oven.

It's a dream project for a Notre Dame law professor and her partner, who have traveled around the world to various breweries and pizzerias- in hopes of one day running their own.

"We're trying to model the very best of those kinds of businesses and bring it to New Buffalo so it will be high quality and kind of small batch brewing and really high quality pizza,” said developer Jane Simon.

Simon currently lives in Valparaiso but she would move to the home next to the church if the deal goes through.

McCollum says they plan on restoring the original woodwork and importing stained glass windows from Europe.

"If we look inside here, we can see all the original wood trusses so what we're planning to do is sandblast all of these, and build a new roof structure above here,” said McCollum.

Simon says it would bring 25 to 30 jobs to the area-- something the community is really excited about.

"It needs something else downtown here I feel. You've got a couple regular bars that have been here for a while. But it would bring something fresh, a fresh idea, to the community,” said New Buffalo resident Alexis Hager.

Commissioners will discuss the project on Tuesday, February 10 at 6:30 p.m. in the Community Room at New Buffalo City Hall on West Buffalo Street.