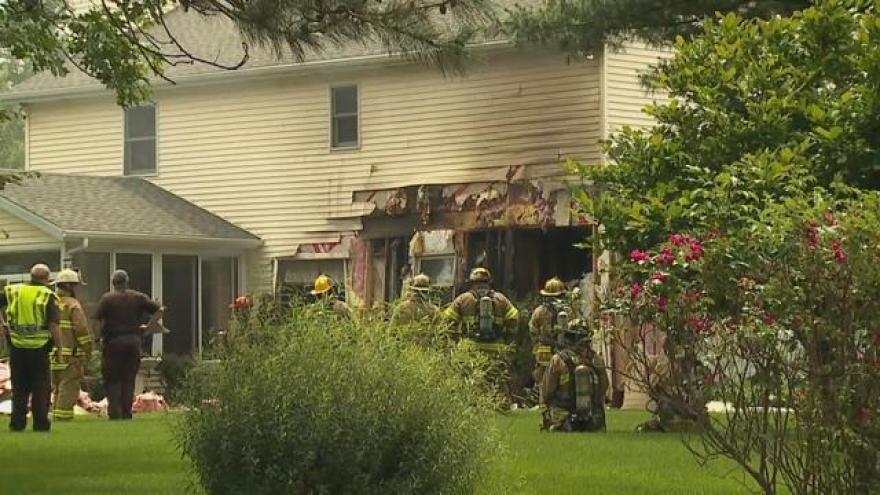 One of the people hospitalized after the house on Jodie Lynn Drive in Granger exploded on June 19 has been arrested and charged related to the explosion.

According to the probable cause affidavit, Ellenberger started both cars in the garage, turned on all the knobs on the oven and unscrewed a gas supply pipe in the basement in an attempt to commit suicide by carbon monoxide poisoning.

“There is information in the charging document that suggests that this was a suicide attempt on behalf of the defendant,” said Assistant Chief Bill Thompson with St. Joseph County Police.

The investigation revealed Lauren Ellenberger and her boyfriend Ryan Wobbe stopped by the Jodie Lynn Drive house during the afternoon on June 19 so Lauren could change clothes.

When they arrived, they opened the garage door via the keypad and noticed both cars in the garage were running, but no one was in either vehicle.

Lauren and Ryan went inside the house and smelled a strong odor of natural gas.

They located Michelle Ellenberger passed out on the couch.

Lauren went back to the kitchen to turn the burner knobs off when the explosion happened. The kitchen ceiling came crashing down on top of her, according to court records.

Lauren, Ryan and Michelle were all able to escape the home through the front door.

One of the first officers on scene, Officer Reppert with the St. Joseph County Police Department entered the home to search for any people still inside.

When he exited the home he was pale and unsteady on his feet. He was taken to the hospital for treatment of smoke and heat exposure.

Lauren and Ryan were also taken to the hospital for treatment after the explosion.

Lauren suffered head pain when the kitchen ceiling collapsed on top of her and suffered from smoke inhalation, according to court documents.

Ryan continues to experience headaches and ringing in his ears as a result of the explosion, according to the affidavit.

Michelle Ellenberger was taken to the hospital after the explosion for carbon monoxide poisoning and benzodiazepine overdose, according to the affidavit.

She allegedly told medical personnel she had consumed several Xanax pills that day.

No other homes in the neighborhood were damaged in the explosion.

“Anyone who takes these kinds of steps is not only endangering their own lives, but they’re endangering the lives of everyone in their neighborhood, their own family members who might come home unexpectedly, and certainly the lives of all the first responders, all the police, firefighters, and EMS personnel,” said Thompson.

Fire Investigator Dave Cherrone examined the home after the explosion.

He determined the explosion damaged the kitchen, dining room, laundry room and the basement. He also discovered the gas supply pipe in the basement had been manually unscrewed, according to the affidavit.

Two days after the explosion, Michelle checked herself out of the hospital against medical advice and walked 7 miles to the Jodie Lynn Drive residence. She was then taken to Epworth memorial Hospital for a 72 hour commitment, reports said.

Michelle Ellenberger was arrested on the three counts of arson resulting in bodily injury, one count for each person injured – Lauren, Ryan and Officer Reppert, and one count of criminal mischief.

Family members expressed concern Michelle would try to hurt herself again and could harm them again, so they requested a no contact order as a condition of her bond.

Ellenberger was employed by Granger Community Church. They released a statement on Tuesday:

Our hearts are saddened by the tragic news surrounding our employee, Michelle Ellenberger, and her family. We are concerned and will be diligent to provide care and appropriate assistance through this time, for both Michelle and her family. Due to the ongoing investigation, we will not comment further on the situation.