Protesters across US voice concern over Trump policies 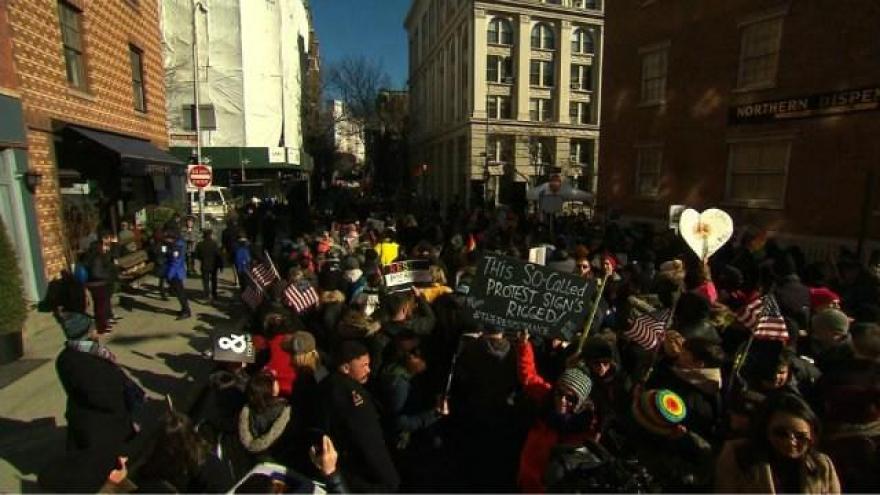 Though not on the scale of last weekend's protests, demonstrators gathered in cities such as Denver, Houston, Miami, New York, Philadelphia, St. Louis and Washington.

A protest also took place in West Palm Beach, Florida, close to Trump's Mar-a-Lago club, where he is spending the weekend.

There were a variety of themes at the protests. Some people voiced objection to the President's proposed border wall. In other places people spoke out for rights for refugees, immigrants and LGBT Americans.

The gatherings took place one day after a federal judge in Washington state issued a temporary stay on the President's immigration ban executive order.

The White House quickly responded in a statement, saying the Justice Department will fight to block the order "at the earliest possible time."

Here is what was happened around the nation Saturday.

Protesters walked along Pennsylvania Avenue from the White House to the US Capitol to "deliver a clear message to the doorsteps of President Trump, members of Congress, and the courts," according to a Facebook event page.

At the front of the pack, participants held a banner across the front row saying, "No Ban," referring Trump's January 29 executive order that temporarily bars citizens of seven Muslim-majority countries from entering the United States.

Demonstrators also stopped outside the new hotel owned by the Trump family before moving on.

Ramin Mehdizadeh, an Iranian who founded an architectural firm in Washington, told CNN he is worried his parents in Iran won't be able to come to the United States to see their grandchildren. He is also concerned that something would happen if he went overseas and tried to return.

"I have a life here. I have a business here. It is so scary," he said.

Christine Montgomery, born and raised in the capital, said many immigrants marched alongside her African-American family and friends in the Washington "Black Lives Matter" protests.

"With him in office, he's really bringing this country together," she said, pointing to the crowd's diversity.

CNN affiliate WABC reported thousands of people congregated in Greenwich Village at the Stonewall National Monument, voicing opposition to the stances of the White House on LGBT issues.

Four arrests were made on Saturday during the protests, the NYPD told CNN.

Stonewall was the country's first national monument honoring the LGBT movement. WABC reported organizers called for a rally when a draft of an executive order circulated this week that would have curbed LGBT rights.

"This is an unpredictable White House that makes very erratic policy decisions ... so we believe we have to be out in front of these fights," said Zeke Stokes, vice president of programs for GLAAD, an LGBT activist group.

Protesters also spoke out for other groups that they believe are being discriminated against.

"As a member of the LGBT community, I'm here to say that whether you are Muslim, whether you are Latino or Latina, an immigrant or a refugee or anybody else whose been antagonized by this demagogic tyrant, we have your back," said New York City Councilman Corey Johnson. "We have the responsibility to look out for each other."

A sizable crowd stretched a mile down the sidewalk on Flagler Drive as thousands of people walked towards President Trump's weekend residence.

Across the water, the lights of Mar-a-Lago seemed to be off. Later, fireworks went off above the club, likely at the end of a fundraiser being held.

On the West Palm Beach side, a few dozen pro-Trump counterprotesters showed up and at one point there was a tense moment when a man got out of a pickup with a Trump flag. When there was a physical altercation, police moved in. It did not appear that anyone was detained.

Some marchers went across the bridge and stood on the road across from the club, where a Red Cross Ball was being held. After staying there for a few hours, the protesters went home.

But before departing, they sang the Star-Spangled Banner and chanted, "U-S-A!" One man yelled "Hey, we are all on the same team."

Trump supporters heckled marchers, saying, "This is your president."

"No ban, no wall," protesters said as they walked through Miami to the Miami-Dade County courthouse, CNN affiliate WPLG reported. Miami police kept an eye on the marchers, occasionally stopping traffic so the scores of people could continue through intersections.

At the courthouse, the protesters almost filled the steps to the building.

The demonstrators included children, some of whom brought handwritten signs. "Dump Trump," a couple said.

A gathering in the Colorado capital was designed to show support for "our Muslim neighbors," a Facebook post for organizers said.

Many in the crowd that gathered at Civic Center Park near the state capitol sang "This Land is Your Land" in protest of President Trump's immigration orders.

One man held a sign that said, "I am not afraid of Muslims, I am afraid of our president." Another said: "We are all immigrants."

They were far outnumbered by the crowd of several hundred.

The city is teeming with people there to watch the Super Bowl, and according to CNN affiliate KTRK, protests there didn't cause any issues.

One demonstrator held a sign that read, "If I had Muslims, undocumented immigrants, refugees, black & queer folks in my uterus, would you try to save them."

They called it the March on the Arch. Protesters trekked from Union Station Hotel to Memorial Plaza to the Federal Courthouse to the famed Gateway Arch. It was organized by the Missouri office of the Council on American-Islamic Relations.

"No hate, no fear; refugees are welcome here," the crowd chanted.

One of the bigger protests appeared to be in the city of Brotherly Love, where people jammed into Thomas Paine Plaza outside the city's Municipal Building.

"So that's supporting Black Lives Matter, native rights for water, LGBT issues, standing with women, standing with our Muslim brothers and sisters who are banned, and that's standing with immigrants and refugees who have a right to be here," she told the station.