Puerto Rico governor: Power could be out for months 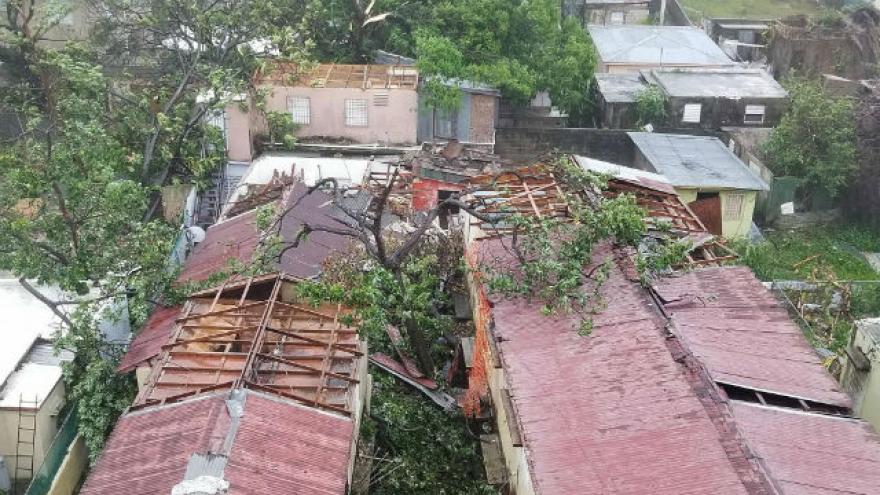 The entire system is down, the governor said. No one on the island has power from utilities.

Puerto Rico, which has been through a long recession and is deeply in debt, has a power grid that is "a little bit old, mishandled and weak," Rosselló told "Anderson Cooper 360˚."

"It depends on the damage to the infrastruacture," he said. "I'm afraid it's probably going to be severe. If it is ... we're looking at months as opposed to weeks or days."

The impact of the storm on the island territory won't be realized until officials can do a flyover and see what remains.

Rosselló said officials think some power stations are not badly damaged, but the distribution system is ruined. If transmission lines are in better shape than thought, power outages might be fixed sooner, the governor said.

Rosselló told CNN that at least one person died in the storm when a board was ripped from the house it had been nailed to by the wind and hit a man. The governor said the number of casualties in some areas is unknown because it is hard to communicate.

"We still don't have a lot of information," he said. "We're virtually disconnected in terms of communications with the southeast part of the island."

The storm -- which restrengthened into a Category 3 hurricane early Thursday -- has ravaged the Caribbean over the past few days, wreaking devastation on Dominica and the Virgin Islands before slamming into Puerto Rico.

And the threat is not yet over. A hurricane warning is in effect for the Turks and Caicos, the southeastern Bahamas and parts of the Dominican Republic.

On the island of Dominica, which took the full force of Maria before the storm passed on to the US territory, government spokesman Charles Jong told CNN that 14 people had died.

He added that Maria was the "most horrifying experience" he has faced, despite seeing out many other hurricanes. He said he is out of power, food and water, and that people in Dominica have "gone into survival mode." He added that there is widespread looting on the island.

The devastation on Dominica is immense, a CNN crew flying over the island reported. Hundreds of homes have been visibly flattened or damaged. Many had roofs torn off.

The landscape has been stripped bare. Thousands of trees have been snapped at their base and those still standing are devoid of leaves. Dominica was a lush green landscape, including rainforests, but now is brown and lifeless.

Storm has moved toward the Dominican Republic

Now that Maria has moved past Puerto Rico, a US territory with 3.3 million people, search and rescue teams are taking to the country's darkened streets.

The devastating winds had died down to a whisper late Wednesday and the flooding rains were just a drizzle, but getting around was difficult due to widespread damage and no electricity except from generators.

The storm caused widespread flooding and ripped trees out of the ground. More than 10,000 remained in shelters Wednesday night.

"This is total devastation," said Carlos Mercader, a spokesman for Puerto Rico's governor. "Puerto Rico, in terms of the infrastructure, will not be the same. ... This is something of historic proportions."

Maria is next expected to pass by the Dominican Republic and the Turks and Caicos Islands, causing dangerous storm surge and rainfall. People in eastern parts of the Dominican were seeing whipping winds Wednesday night.

The once-major hurricane has already killed seven people on the Caribbean island nation of Dominica, said Gaston Browne, the Prime Minister of Antigua and Barbuda.

Browne said he had been communicating with the Prime Minister of Dominica, Roosevelt Skerrit, who reported "widespread devastation" and whose own house was shredded by the storm.

Puerto Rican Olympic gymnast Tommy Ramos, who rode out the storm in the northern city of Vega Baja, posted video of gusts blowing debris in front of him.

"The house is steady," Ramos told CNN. "What scares us is the flooding."

Astriv Velez, who survived the storm inside a walk-in closet, said water was coming in through the walls of her home in Trujillo Alto, just outside San Juan.

"The wind and rain has not stopped," Velez said. "There are no trees, there is no green -- only brown."

Aaliyah Bisamber of St. Croix shot video of Maria's annihilation of her old house, which was right next to her new home.

"I was pretty amazed the hurricane had such power to rip off half the house," she told CNN.

Murillo Melo recently moved to St. Croix from Brazil -- only to face one of the island's most catastrophic hurricanes.

"It was really scary. The floors were shaking, the walls, everything was moving and shaking," he said.

"First priority is going to be saving of lives -- not just in Puerto Rico, US Virgin Islands -- I'm especially concerned with St. Croix, that was also in the path of Hurricane Maria when it was a Category 5 hurricane," Zukunft said Wednesday.

On the US Virgin Island of St. Thomas, retired New York police detective Austin Fields surveyed the damage to his residence.

Virgin Islands and Dominican Republic under the gun

Maria's wrath is far from over.

Dangerous storm surges "accompanied by large and destructive waves" will raise water levels 10 to 15 feet above normal tide levels in the hurricane warning areas of the southeastern Bahamas and the Turks and Caicos, the hurricane center said. The islands could also see as much as 20 inches of rain.

Some long-range models say Maria could move toward the North Carolina coast as it moves north. CNN Meteorologist Tom Sater said people should keep an eye on the storm.

Maria became the first hurricane of Category 4 strength or higher in 85 years to make a direct landfall on Puerto Rico.

The hurricane slammed the US territory with such intensity, it broke two National Weather Service radars there.