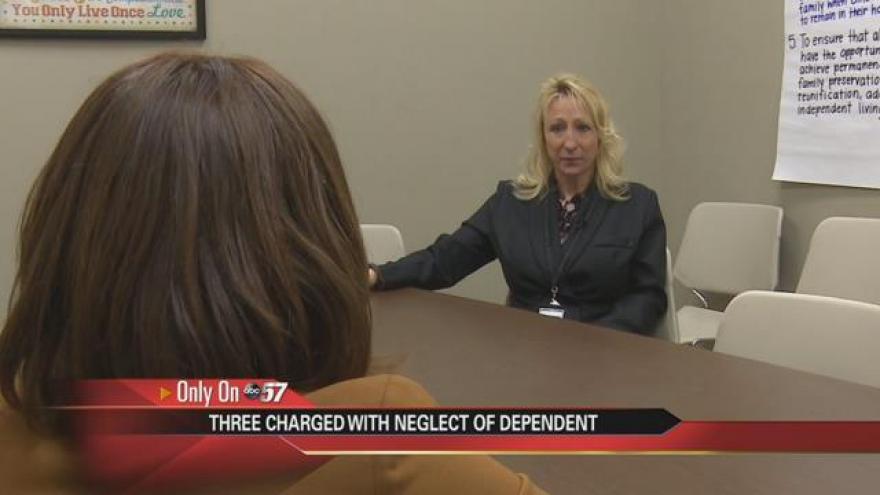 Pulaski County’s DCS Director spoke exclusively with ABC 57’s Jess Arnold about the process they follow for neglect cases, like the one where a child was found locked in a box.

The three people being charged with Neglect of a Dependent appeared in the Circuit Court for their pre-trial conference Tuesday morning.

“It’s not just the cases that are in the eye of the public, it is every child abuse or neglect case is terrible,” said Pulaski County DCS Director, Crystal Williams.

She says she's seen a lot of terrible things in her nine years with the department.

One that’s received a lot of attention in Pulaski County is the case where a toddler was found locked in a plywood box back in December.

“We have to depend on what we see and hear. We have to have tangible evidence. We can’t remove on a gut feeling. Everyone has gut feelings, but gut feelings aren’t evidence,” said Williams.

In this case, deputies and child services did find enough evidence of the home being unsafe to remove the three-year-old locked in the box, as well as the four other children discovered in the home.

“We are a reactive agency, we’re not proactive, so if we don’t know about something, we can’t assess for child abuse or neglect,” said Williams.

DCS heard about the child after the Pulaski County Sheriff’s Department received recorded phone conversations from the Westville Correctional Facility between an inmate and some of his relatives living in the house.

Those relatives included his sister, Thelma Meeks and his son Michael Meeks, Jr.

They are both being charged with failure to report.

Here’s how some Northwest, IN counties stack up:

Compared to neighboring counties, Pulaski looks like it had the fewest CHINS cases in January, but when you divide by population, it actually had the second highest rate, after Starke County.

“There are some differences with regarding generational poverty, those kinds of thing we deal with a lot around here—but the substance abuse is pervasive,” said Williams.

Regardless of the reason for neglect or abuse, Williams says she has one goal.

The three people being charged with Neglect of a Dependent will face a jury trial in January of next year.