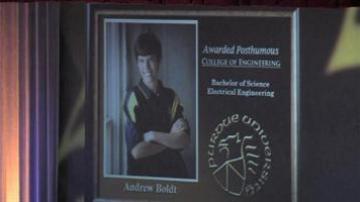 WEST LAYFAYETTE, Ind. -- Purdue University handed out more than 6,000 degrees during their graduation ceremonies. The engineering student who was shot to death on campus earlier this year was given a posthumous degree.

Andrew Boldt was killed in a classroom in January.

Friday he was honored with a posthumous bachelor of science in electrical engineering.

"That happened earlier this semester, so I thought it was very fitting, very kind of the university to do that for him," said graduate Meghan McKendry.

The trial for Cody Cousins, the man accused of killing Boldt, is scheduled for October.