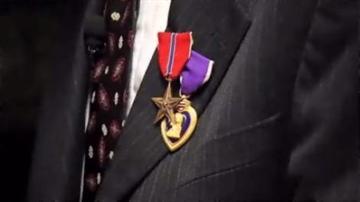 He was given the Purple Heart at the age of 90.

George Hemphill was wounded by sniper fire in France in 1944. From the hospital, he mailed his Purple Heart home and never gave it a second thought.

It got lost and was found by a man who hunts down purple hearts and returns them to families. It ended up at an antique store.

He was also awarded the Bronze Star Monday.