Pursuit knocks out power to about 100 homes 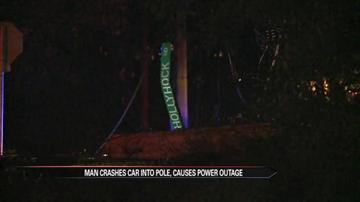 SOUTH BEND, Ind. — A Niles man is recovering in the hospital after an early morning crash in Berrien County, Michigan. The accident happened just across the state line near Hollyhock and Stateline Roads.

According to the police, the pursuit started in St. Joseph County, Indiana.

Police say the crash ended when the driver crashed into a pole near the state line. And that knocked out power to aroud 100 people.

Officers have identified the driver as Richard Metz, 29, of Niles, Michigan.

The road was blocked off while crews cleaned up the scene.

ABC57 talked with a neighbor who heard the accident from inside his home. The neighbor says that he saw the driver get out of the car and start walking down the street.

Metz was taken to the hospital where police say he is expected to be okay.