Putin to US: Don't play along with North Korea 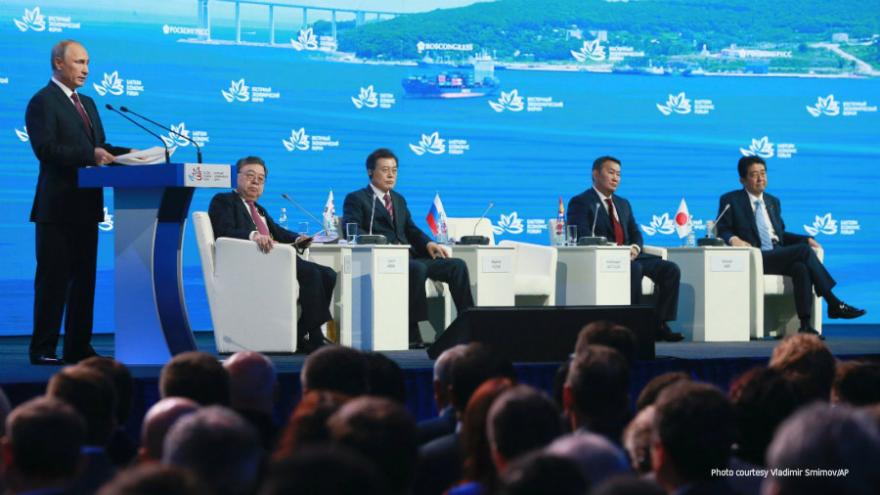 (CNN) -- Russian President Vladimir Putin told an economic forum Thursday that the United States could be playing into North Korea's hands by trying to ramp up pressure on Pyongyang.

The Russian leader has been unusually outspoken about North Korea and how the global community should respond in the wake of that country's sixth nuclear test on Sunday.

North Korea's minister of external economic relations, who is at the forum, said his country will "respond to barbaric attempts to exert pressure by the US by our strong countermeasures," according to the Russian state-run news agency Tass.

"Attempts to use unprecedented aggressive sanctions and pressure to intimidate us and make us reverse our course are a huge mistake," said the minister, Kim Yong Jae. "The United States should by all means keep in mind the nuclear status of our country, (which) owns nuclear and hydrogen bombs, and intercontinental ballistic missiles."

China and Russia, which also have denounced the nuclear test, are calling for more dialogue.

"It's a provocation from North Korea, it's obvious," Putin said of North Korea's latest nuclear test. "They count on a specific reaction from the partners and they get it. Why are you playing along with it? Have ever you thought about it?"

Putin and Abe held a bilateral meeting Thursday, after which both leaders reiterated their countries shared a common understanding of the threat that North Korea poses.

US push for more UN action

Putin's warnings haven't stopped the United States from trying to pursue a tough global response to the nuclear test, especially at the United Nations.

Washington has proposed a new UN Security Council resolution, according to a UN diplomat, to punish North Korea by freezing the assets of Kim Jong Un and members of the ruling Worker's Party of Korea, fully banning exports of oil to North Korea, banning all textile imports from North Korea and banning North Korean laborers from generating earnings overseas.

"The time for half-measures in the Security Council is over. The time has come to exhaust all of our diplomatic means before it's too late. We must now adopt the strongest possible measures," Nikki Haley, the US ambassador to the United Nations, said earlier this week.

Haley may have trouble getting other Security Council members -- especially Russia and China, which each hold veto power -- to sign onto the draft sanctions as they're currently written.

Moon and Putin met on the sidelines of the economic summit Wednesday, where the South Korean leader tried to persuade his Russian counterpart to agree to banning oil exports to North Korea.

"They know it and they see nuclear weapons and weapons of mass destruction as the only way for them to protect themselves," Putin said Thursday.

Moscow exports about 40,000 tons of oil to Pyonyang, a tiny percentage of Russia's overall trade, Putin said, according to Yoon.

When asked about the new US proposal, Chinese Foreign Minister Wang Yi said at a news conference that China and the Security Council need to "take necessary measures."

"China will make close communication with relevant parties with an objective, fair and responsible attitude," Wang said without commenting if China would agree to curb oil exports to North Korea.

"We believe that sanctions as pressure are only half of the key to resolving the nuclear issue. The other half is dialogue and negotiation," he said. "Only when the two are put together can it unlock the nuclear issue of the Korean Peninsula."

South Korean Prime Minister Lee Nak-yon said his country expects its northern neighbor to test-fire the type of long-range missile designed to deliver a nuclear warhead to far-off places such as the United States on Saturday, an important North Korean holiday.

"The situation is very grave. It doesn't seem much time is left before North Korea achieves its complete nuclear armament," Lee told a meeting of defense ministers Thursday in Seoul.

South Korea has carried out military drills since Sunday's nuclear test. Also, the final parts of a controversial US-built missile defense system arrived at a base in Seongju, south of Seoul, greeted by throngs of protesters.

Russia and China opposed the deployment of the Terminal High Altitude Area Defense, or THAAD, system, saying it has the potential of fueling an arms race.

Analysts said the two are also concerned the system's advanced radar could be used to look inside their own countries or potentially even limit their deterrent capabilities.