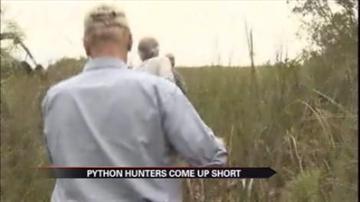 MIAMI -- It started out as an ambitious python-hunt to eliminate the invasive snakes in Southern Florida but so far fewer than 20 snakes have been caught after a full week of hunting.

Turns out the snakes are not only difficult to kill but there might not be as many of them as state leaders estimated.

The state blames irresponsible pet owners for dumping unwanted pythons in swamps for the so-called "snake-boom."