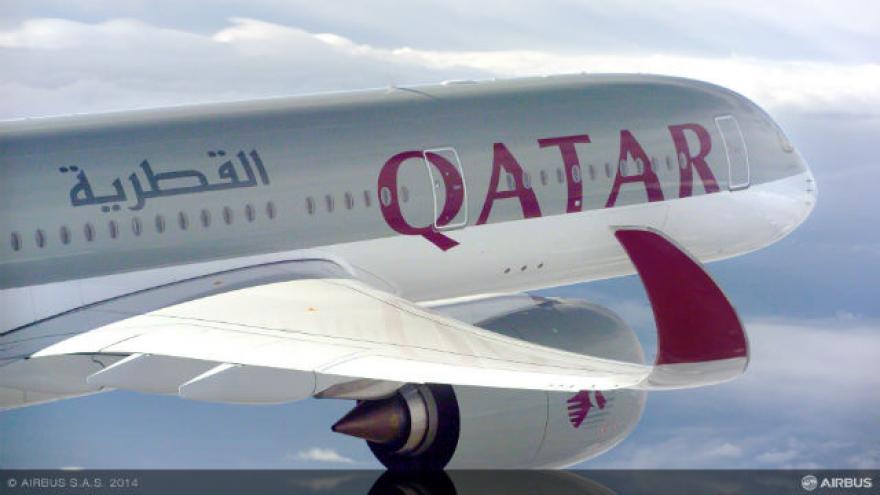 \"Qatar Airways indicated that it has an interest in acquiring approximately a ten percent stake,\" American Airlines said in a statement on Thursday, June 22, 2017 adding that Qatar wanted to buy at least $808 million of the company\'s stock. Photo courtesy Qatar Airways

DUBAI (CNNMoney) -- Qatar Airways has long been at odds with American Airlines. Now it wants to buy a big chunk of the U.S. carrier.

"Qatar Airways indicated that it has an interest in acquiring approximately a ten percent stake," American Airlines said in a statement on Thursday.

American, along with Delta and United Airlines, has repeatedly accused state-owned Qatar Airways and its big regional rivals -- Emirates and Etihad of the United Arab Emirates -- of enjoying massive government subsidies that have helped them become leading global players.

The U.S. carriers want President Trump's administration to review the Open Skies agreements that allow the Gulf carriers to fly freely from the United Arab Emirates and Qatar to any U.S. destination. They claim the airlines rapid expansion in the U.S. is hurting American jobs. The Gulf airlines deny those claims.

American Airlines shares climbed 3% in response to news of the unsolicited approach from Qatar Airways, which said in a statement that it is planning to buy an initial stake of 4.75%.

That's the most it can own without the prior approval of American's board. And foreign ownership laws would prevent it from buying more than 24.9%. Qatar said it was seeking a "passive position in the company with no involvement in management, operations or governance."

American Airlines CEO Doug Parker wrote to employees, telling them executives "aren't particularly excited" about Qatar's interest in acquiring a big stake in the company. He also said American Airlines would continue its "full court press in Washington, D.C., to stand up to companies that are illegally subsidized by their governments."

"If anything, this development strengthens our resolve to ensure the U.S. government enforces its trade agreements regarding fair competition with Gulf carriers," Parker wrote.

Despite the tension, Qatar Airways and American have been partners in the OneWorld alliance since 2013.

The Gulf airline has already invested in other members of the alliance with a view to cooperating more closely in markets where it lacks reach. It owns 20% of International Consolidated Airlines Group (parent of British Airways and Spain's Iberia), and 10% of LATAM Airlines.

"Qatar Airways equity positions will clearly solidify these relationships," said Rob Watts, managing director at Aerotask, a global aviation consultancy firm. "This may be particularly important if the other Gulf carriers endeavor to develop similar commercial relationships with these airlines. To some extent, it may give Qatar Airways 'veto rights' on access to their networks."

Qatar Airways has been under pressure back home after being blocked by its neighbors Saudi Arabia, the UAE and Bahrain over a political dispute. It can no longer fly to 18 destinations in those countries, forcing it to ground about 50 flights a day. It also needs to avoid those countries' airspace, adding to fuel costs and flight times.

The airline's CEO, Akbar Al Baker, has accused the Trump administration of "putting fuel on [the] fire" of what he called a "blockade" on his country.

Initially, Trump seemed to welcome Qatar's diplomatic isolation, going so far as to suggest he was partially responsible for the decision. More recently, the U.S. State Department questioned the actions and said it was supporting Kuwaiti efforts to resolve the dispute.

Qatar Airways had already had a tricky start to the year, when fallout from Trump's proposed travel ban and the U.S. electronics ban hurt business.

But there was some good news for the airline on Tuesday, when it was awarded 'Airline of the Year' by Skytrax.