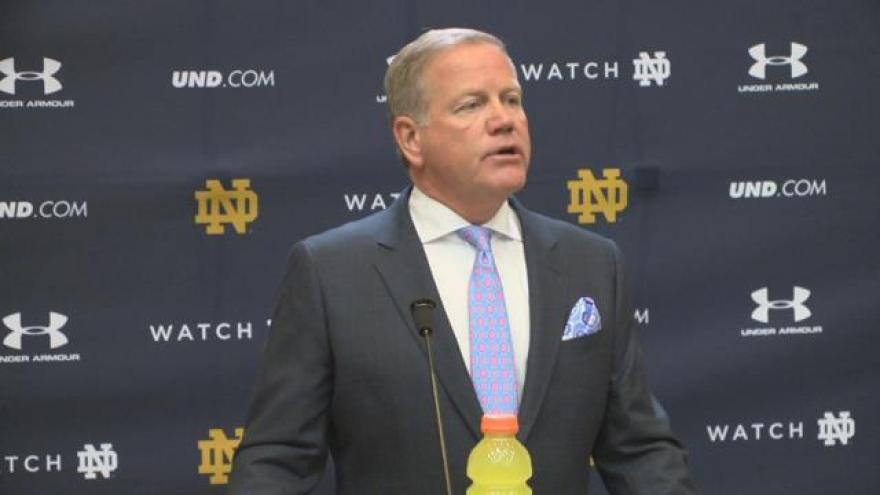 NOTRE DAME, Ind. -- Notre Dame Football is officially back and the big question as summer camp opens is who will be the starting quarterback.

There are two distinct candidates, DeShone Kizer and Malik Zaire.

Kizer returns after leading the Irish to 9 wins with a 10-3 record last season,

Head Coach Brian Kelly says there is no quarterback controversy, and no possibility is off the table.

"We have two really good quarterbacks based upon what we've seen on film and we've got to let them both compete,” Coach Kelly said.

Kizer began last season as the backup, but took over the starting role after Zaire suffered a season ending injury in week two.

Now Zaire is back, changing the dynamic of fall camp.

“Now walking in with a little pressure on my back, I like it. This is where I want to be. This is what I came here to do, to compete and try to be Notre Dame's quarterback,” Kizer said.

Although fall camp begins Saturday, Kelly says he has no deadline on when to name the starter and hasn't ruled out both quarterbacks playing.

"If you go down the roster and look at the play makers on offense, two of them on the quarterback side, so I got to look at all of those and factor everyone of them in. For me not to look at every scenario possible as it relates to the quarterback position I would be not being smart as a football coach. So everything is on the table as it relates to that,” Coach Kelly said.

Zaire touts big wins over LSU and Texas before his injury and says he is ready to prove that he deserves that starting role.

He has lofty goals for the season.

"My motivation is to be the best quarterback in the country and to win a National Championship so I got to do the things that are necessary and continue preparing, be prepared. So I'm just excited to get started,” Zaire said.